IMAX vs. RPX: Which is Superior? 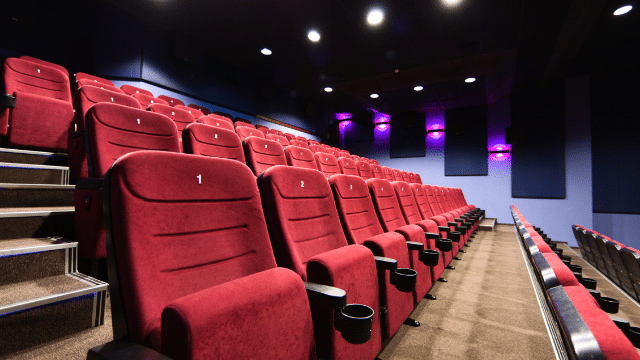 If you love going to the movies, you might want to know how to ensure your experience is exceptional. While IMAX and RPX both help you fully enjoy your movie, how do you determine which one is superior?

Some aspects are the same on paper. For example, they each offer bigger screens, better sound and more comfortable seating. But is one better than the other, or are they just meant for different things?

IMAX offers a fully immersive experience, placing you inside the action as much as possible. On the other hand, RPX is a theater experience that prioritizes comfort, quality and the latest technology.

Before you spend the extra money on upgraded tickets, here’s the scoop on the intentions of the two as well as how they compare in terms of comfort, technology, screens, sound and overall experience.

IMAX, which stands for “image maximum,” is a full theater experience. It includes theater seating, immersive sound and stunning visuals.

Beyond the immediate theater experience, IMAX also relies on how the camera is used and how the film is shot.

Invented as a way to give moviegoers a more captivating way to watch movies, it’s been continually improved on over the years to become what it is today.

To produce a movie for IMAX, it must be shot on IMAX digital and film cameras with the largest resolution format available. This produces stunning big-screen images with detail that cannot be captured anywhere else.

IMAX digital cameras are able to optimize clarity and detail for the big screen. That said, there are varying quality cameras, with the smaller ones looking more like widescreen than IMAX.

Shooting on true IMAX film produces the largest image available. While most film shoots one frame for every five perforations along a film strip, IMAX is one frame per 15.

The size of the film itself is so large that an IMAX camera can only hold about three minutes worth at a time. These cameras can also be rather loud, so they don’t lend themselves to all types of movies.

IMAX uses DMR (digital image remastering). This is a proprietary image enhancement process that goes through each and every frame to optimize the image. In turn, this produces the clearest, sharpest picture possible.

While IMAX is known for its massive, wall-to-wall curved screens, it’s more than that. The original creators wanted you to feel like you were part of the action, and its custom theater environment does just that.

It’s continually updating the technology it uses, including larger cameras, digital dual laser projectors and a surround sound system designed with you in the center.

As a bonus, the patented sound system can reach an entire octave below traditional speakers.

Every seat in the theater is positioned for the best view. The open style allows your field of view to expand to an average of 70 degrees. There’s nowhere around you that isn’t in the movie.

IMAX offers the most immersive movie experience in the world. It includes super sound, projectors with the brightest colors, 3D capability and the biggest screens.

Some of the best films to watch via IMAX are those about nature, space or action documentaries like fighting forest fires. You probably wouldn’t seek it out for quieter, character-driven movies.

But, when you use it for what it’s designed for, it is a viewing experience like no other.

RPX is the abbreviation for “Regal Premium Experience.” Like IMAX, it is a theater experience that includes bigger screens, immersive sound and premium digital and laser projectors.

However, it lacks the detail of proprietary image optimization and a specialized way of shooting the film.

On the plus side, RPX is suitable for any movie.

Regal created RPX to be a step above the traditional theater experience but below the IMAX digital experience. It was Regal’s way of staying competitive with other theaters that were announcing similar projects.

The company used RPX to go all out with comfort and create an environment that justified the higher-priced tickets. The screens are produced by the same company that makes IMAX screens, but they aren’t quite as big.

RPX tries to make all screen widths 60 feet. However, they range from 45 feet up to 75 feet, depending on space.

Laser projectors have been rolling out to RPX theaters. That said, locations without 4K projectors are capable of showing 4K movies at 33,000 lumens and a contrast ratio of 1,850:1.

Upgraded, uncompressed surround sound is a feature of RPX. In the U.K. and Europe, they use Aurus spacial sound systems, a three-tier audio system. Many theaters in the U.S. use Dolby Atmos.

All RPX theaters have comfortable leather seats, and some feature reclining seats. RPX aimed to make themselves a premium experience for moviegoers, regardless of the type of film.

It is 3D capable and provides a riveting experience for any movie. RPX is definitely a step up from your regular trip to the theater and worth spending a few extra dollars.

How Do IMAX and RPX Compare?

There are many ways in which IMAX and RPX are similar, but each has its own advantages and disadvantages.

In the IMAX vs. RPX showdown, here’s how the two compare in terms of comfort, technology, screen size, movie experience and audio.

Since IMAX optimizes every seat in the theater for the best view, there’s no seat that makes the viewer uncomfortable. The seats do not recline, though there are some theaters where the seats can push back a little bit.

All seats in an IMAX theater have a completely unobstructed view of the center of the screen. Since the IMAX experience is primarily about visuals, seating is configured to ensure that there isn’t a bad seat in the house.

RPX was designed specifically for the comfort of its guests. It offers leather reclining seats, extra padding and speakers right inside the seat.

The seats are wider, with high backs and headrests. Better yet, there’s plenty of room for people to walk by without having to move, even with all the seats in the row ahead reclined.

IMAX technology is much more in-depth than RPX. This is because the movie itself has to be shot with specific high-resolution cameras and film. It is a difficult but rewarding process.

Movies that use IMAX technology can only shoot about three minutes at a time. This is the maximum amount of film the camera can hold. Plus, they’re loud, so it’s nearly impossible to shoot quiet films.

The screens in their theaters are curved in the center, which makes a dome shape that gives a 3D effect even when it’s in 2D. IMAX uses dual 4K and 2K laser projectors as well as 12-channel proprietary sound systems.

On the other hand, RPX is always rolling out new technology. They use digital and laser projectors capable of 4K projection at 33,000 lumens and a contrast ratio of 1,850:1.

The image quality is similar to IMAX, but the image isn’t quite the same since the screen isn’t curved. However, the screen is excellent for anything shot in widescreen.

The sound technology is a 7.1 channel Aurus system or sometimes Dolby Atmos in the United States.

RPX aims for screens to be 60 feet wide. That said, they range anywhere from 45-70 feet based on available space.

RPX and IMAX screens are manufactured in the same place. This means that building quality is equal. However, the setup and size are different.

IMAX strives to be the most immersive movie experience. Even with 2D, the images on the screen feel like they’re approaching the audience.

The seats are steep in an IMAX theater. This ensures the viewer is facing the center of the screen directly no matter where they’re sitting. It also provides an unobstructed view.

When it comes to audio, the sound envelops you. Everything feels like it’s happening in reality.

In addition, the vivid, crisp pictures stand out. With IMAX, you’re meant to be an active part of the experience.

The comfort and roominess of the reclining seats, the closeness of the sound and excellent projection technology make for few interruptions to the overall experience.

RPX is like a super-charged theater that comes with amenities that make it much better than a regular theater.

IMAX theaters have a 12-channel audio system. Some even use Dolby Atmos.

Their sound systems are a standardized part of their theater experience. This means that no matter which IMAX you attend, you’ll be getting a killer sound experience.

With IMAX, there are speakers overhead and placed all around for maximum immersion. Their speakers are so good that they even go one octave below traditional speakers. The range is truly impressive.

RPX uses a 7.1 channel audio system. Plus, they install low-frequency transducers inside every seat to make each one its own little sound bubble.

Even with this feature, the sound you experience with RPX is not quite as good as Dolby Atmos or other high-res audio.

Regardless, RPX’s audio setup does make for a movie experience that isolates all other noise and distractions around you. It’s almost like having your own personal theater.

RPX’s goal is to be a step above regular theaters, and it definitely accomplishes that.

IMAX vs. RPX: Which is Better?

It is easiest to compare IMAX vs. RPX when you look at their goals.

Overall, IMAX is meant for you to feel like you are in the center of the action, whether it’s diving in the ocean or hiding from lions on the Savannah.

RPX wants to give you a premium movie experience with the latest technology. This includes enhanced visuals, surround sound and bigger screens.

It is equipped to shift any movie to premium, whether it’s high-octane action, 3D or dialogue-heavy character films. Ultimately, RPX aims for your absolute comfort and maximum enjoyability of the show.

In short, the better option for you depends on the theater experience you want.

The bottom line is that IMAX and RPX are not the same. From seating and sound to screen size and film creation, they have their differences.

However, they do share some commonalities. They both aim to provide exceptional sound, premium comfort and quality projection.

Think of IMAX and RPX as being similar to a ladder. RPX is above a regular theater experience but below that of the intricate filming and technology of IMAX.

If you’re looking for a luxurious way to enjoy any type of movie, RPX won’t disappoint. But, if you want the maximum experience of being in a film, then IMAX is the way to go.