Receiver vs. Amplifier: Which One Should You Buy? 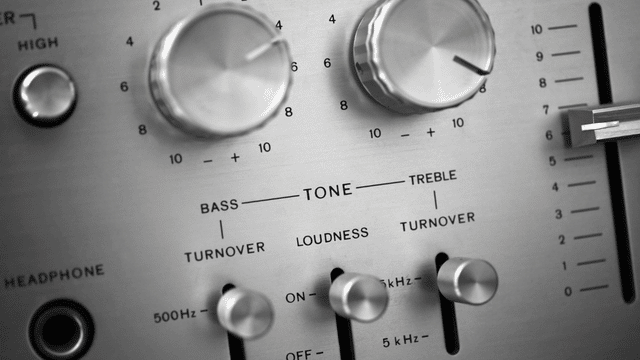 When you are setting up a home theater system, you may need to choose between a receiver and an amplifier. Newbies to this kind of technology often need help selecting the right equipment for their home entertainment setup.

Both options can augment your audio experience, but distinguishing between their functionalities can take time and effort.

If you want to know whether you should buy an amplifier or a receiver, our guide can help you make that decision.

What Is a Receiver?

A receiver is an amplifier with a built-in radio section. You can select the radio component from any other input on the amp without needing another connection besides speakers.

These devices were released in the early 1960s to save space on counters. They offer accessibility to the radio. At the time, this wasn’t as popular a source.

However, due to their versatility, receivers became exceptionally popular and outnumbered amplifiers.

Receivers may also have a visual component to them. This means that they amplify and route audio from numerous sources, process video signals and direct them to a display (such as a TV, video project or monitor).

A receiver even offers additional features, including a radio tuner, video and remote control. It has the capacity to hold several devices at once.

Stereo receivers play a significant role in most home theater systems. They are electrical components that decode signals from various sources. Then, they transmit the signals as sound through speakers or headphones.

Stereo receivers are also used to transmit pictures and audio to a television. They vary in size, compatibility and output style. Some manufacturers refer to stereo receivers as audio, high-fidelity or AV receivers.

The downside with stereo receivers is they’re only suitable for audio playback. Their functions, such as radio, volume control and input buttons, are useful for music-related playback.

As the name implies, this type of receiver handles both audio and video playback. Audio/video (A/V) receivers are ideal for multimedia files and are compatible with nearly all home theater setups.

An AV receiver is the most suitable option for playing gaming consoles, movies or TV series. It comes with several input ports that connect various devices.

There are also ports for connecting to your speaker units. The setup is perfect for individuals who want to boost their gaming experience.

What Is an Amplifier?

An amplifier is an electronic device that increases an audio signal’s power, voltage and current. These devices use electric power to amplify an audio signal.

If you’re looking only to boost the audio and won’t need video functionality or a radio tuner, then you want to invest in an amplifier.

As the name indicates, an amplifier will amplify audio signals in a linear pattern. Therefore, it doesn’t improve or make the sound quality worse.

However, it’s best to note that second-rate amplifiers and amp settings may distort the audio quality.

A power amp is designed to boost the line-level signal to project audio through speakers at a high volume. It’s an electronic component that increases the overall power of an input signal.

The power is increased to a level that’s enough to drive output devices like RF transmitters, speakers or headphones. There might be a variation in power amplification since power amps are used in different devices.

For instance, a power amp suitable for loudspeakers may have a power output ranging from 1kW to 5kW. This depends on the power rating of the loudspeakers.

Besides that, a power amp’s performance and quality depend on the speakers’ resistance load.

A power amp works together with a preamp to convert a small voltage from the output of a preamp into higher current signals. For instance, if you want to use an inexpensive computer speaker, you need a power amp for a louder sound.

As the name suggests, a preamp is used before a power amp. It’s designed to reinforce an instrument’s weak output signal to deliver a high amount of gain.

In terms of home theaters, preamps switch between different line-level sources and improve the signal before sending it to the actual amplifier.

Integrated amps combine a preamplifier and a power amp into the same box, typically by drawing from the same power supply. This means volume control alterations, source switching and amplification are inside the integrated amplifier.

With an integrated amplifier’s preamp, it’s easy to boost low-level signals on phono-level outputs like record players or turntables. It raises the signal to line level.

However, you can get a power amplifier instead of an integrated one to cut costs if you don’t require phono-level signals.

Separates refer to a setup where the power amp and preamp are separate. This means that each one is standalone.

With separates, you’ll also need extra cables and some technical knowledge than you’ll need with integrated apps. They also take up extra space and are more expensive.

Before buying a receiver, it’s important to consider the perks and downsides of this type of audio equipment. Here’s what to remember as you shop around.

There are some clear positives and negatives that come with a power amp. Here are the key points to keep in mind.

Receiver vs. Amplifier: Which Should I Buy?

Are you still unsure about which device you should buy? We break down the benefits of each option to help you make a final decision.

When to Buy a Receiver

If you think you need a receiver, these are the most common reasons why this device is a better purchase than an amplifier.

Ease of Set Up

You may want to choose a receiver if you don’t want the task of setting up separate components. With an AV receiver, you won’t need to keep connecting and disconnecting wires manually.

You can switch between different audio sources at the click of a button if you opt for a receiver. There’s also the option of directly connecting multiple video sources.

A receiver even makes it easier to connect to display devices like a projector or television.

A receiver will be the best option if you have limited space. Unlike receivers, amplifiers aren’t an all-in-one setup.

Most seven-channel AV receivers, for example, will have dimensions of 17.3 x 14.8 x 4.1 inches. Amplifiers, on the other hand, take up more space since each component is self-contained.

In terms of budget, a receiver would be the most suitable choice if you want a cheaper sound system setup. While amplifiers vary in cost and design, you can expect to pay over $1000 for a high-quality model.

If you have a 5.1 surround speaker system, you might need to spend anywhere between $500 and $600 on an AV receiver.

Do you want radio, audio and video functionality combined? Then a receiver would be the most suitable option. The best part about most A/V receivers is they come with a built-in amplifier.

They also have a volume control, a tuner and a preamp.

An A/V receiver can receive an audio signal, process it and then amplify the signal to the speakers. It also transmits a video to a TV or projector.

Best of all, you get access to multiple audio and video inputs.

When to Buy an Amplifier

On the flip side, if you are considering buying an amplifier, these are the top reasons why you should use this device instead of a receiver.

Preamps and power amps for Hi-Fi systems are ideal if you have the budget and enough space. This type of amplification system is easy to set up. All you need is a music source like YouTube or Spotify.

A preamp and power amp combination is ideal for creating the perfect home theater setup. This combination allows you to improve the sound quality of your A/V receiver or take control of your audio.

Most are multi-channel amps that are suitable for surround sound. The preamp and power amp combination is also convenient for amplifying instruments if you enjoy listening to music.

A high-end amplifier will do the job if you want top-notch audio quality. If you’re looking to power a set of speakers, you’ll need a power amp. Then, pair it with a preamp.

While receivers are cheaper, they can’t deliver the same power out that a dedicated amplifier produces. Amplifiers are less likely to damage the speakers or have noticeable distortions.

If you need to produce 100W per channel, a receiver may not achieve such an output. When looking to set up a Hi-Fi system with some speakers and a subwoofer, then a stereo amp would suffice.

Choosing between a receiver and an amplifier can be confusing. However, if you understand how you intend to use the device, making a purchase can be simpler.

An amplifier is ideal if you have a larger budget, want higher-quality audio and have the space for a more substantial system.

Otherwise, for those with smaller budgets and space or who want more versatile functionality, a receiver is the ideal option.

Regardless of which product you choose, you will have improved audio quality as you watch movies, binge-watch TV shows, play video games or listen to music.