What is the Difference Between the Amazon Echo and Dot?

In late-2014, Amazon entered the home speaker market with the Amazon Echo, which at its core, offered itself as “a hands-free speaker you control with your voice.”  Previously, companies such as Ultimate Ears, JBL, Bose, Logitech, etc. flooded the market with a virtually endless supply of wireless bluetooth speakers that relied on a connection to user’s phones and other media devices to play music.

With the Echo, Amazon introduced consumers to the idea of a “smart” speaker, by connecting the speaker to Amazon’s services and allowing other companies to connect their own services. In addition, Amazon built-in a personal assistant named Alexa, which allows users to make inquiries and perform useful tasks such as setting alarms, finding out the weather, ect.  The result was a speaker that does not rely on a connection to anything but a home wi-fi connection, and adds a host of new features never before seen in a home speaker.

After introducing the Echo, Amazon further disrupted the smart speaker category by introducing the Echo Dot in late 2016.  At a retail price of $50 (and often can be had for as little as $35), Amazon removed the price objection from potential buyers, landing the new device squarely in “impulse buy” territory.  The question consumers naturally began asking was, “why pay more for the Echo”? Below we differentiate the various Echo devices to help you make an educated decision about which Echo device is right for you.

Currently in its second generation, the Echo is Amazon’s flagship smart speaker.  Priced at $99.99, it nestles itself squarely in the middle of the wireless speaker price range.  The Echo features one 2.5” downward-firing subwoofer and one .6” upward-firing tweeter to deliver 360 degrees  of full-range sound that fills all but the largest of rooms.

The Echo also connects to Amazon’s personal assistant, Alexa, to play music, set alarms and timers, control smart home devices and even make calls.  The Echo does all this through seven microphones, beamforming technology and noise cancellation, which allows users to invoke Alexa from a distance, even with music or other audio playing. 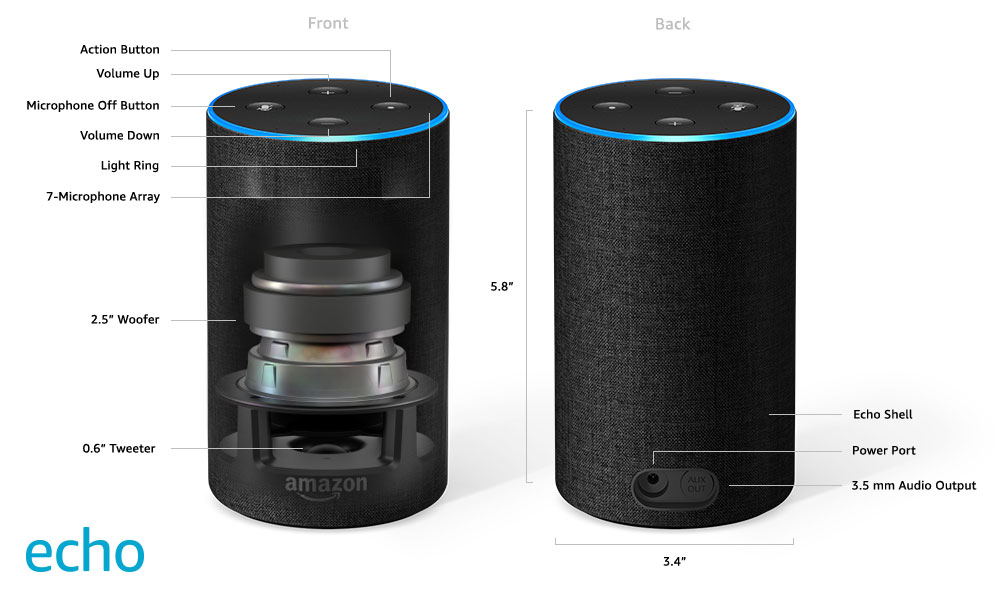 Introduced shortly after the original Echo, the Echo Dot represents Amazon’s attempt to make Alexa truly ubiquitous.  At only $49.99 (and often on sale for less), Amazon’s vision is that Amazon customers have an Alexa-enabled device in every room of the home.  Indeed, Amazon’s current tag-line for the Echo Dot is “[a]dd Alexa to any room”.

On the back of the Echo Dot, Amazon has included a 3.5mm line-out so owners can hook their Echo Dot into their own speaker systems for better audio.  That said, the most recent third-generation Echo Dot significantly improved the on-board speakers so that even those who choose to play music through the device will be greeted with pleasant, full-range sound, free of distortion.

The Echo Dot is available in three fabric colors, including Charcoal, Heather Grey and Sandstone, with the Sandstone option including a white plastic finish on the top and bottom of the device.

Finally, Amazon also offers the Echo Dot in a “kids edition” which, for an extra $20, includes some valuable extra features for families with children.  Specifically, Amazon has tailored Alexa on this device to respond to queries with children in mind. Meaning, when asked to play music for example, Alexa will not play songs with objectionable language, etc.  In addition, Amazon includes one year of FreeTime Unlimited, Amazon’s educational subscription service for children. Amazon also includes a two-year “worry free” warranty, which includes free replacement, even for accidental damage.  Unfortunately, at the time of this post, the Kids Edition of the Amazon Echo had not been updated to the third generation form factor, but we are confident that such an update will follow in short order.

In Amazon’s continuing effort to make Echo devices and Alexa ubiquitous, Amazon also offers these other devices for other use cases:

The Echo Spot is essentially an Echo Dot without the built-in speakers.  Offered at $35, or free when paired with select speakers, the Echo Dot is designed to be connected to existing speakers.  The Echo Spot is the perfect addition to a disconnected home speaker or system with auxiliary input capabilities, adding Alexa to a room at a minimal cost.

The idea of the Echo Spot is a reimagining of the bedside alarm clock.  Sporting a circular 2.5” screen, the Echo Spot is basically an Echo Dot with a screen.  At about a $100 premium over the Echo Dot, the Echo Spot’s value proposition is that it not only doubles as a clock, but it can display relevant information related to Alexa commands and queries, such as weather, sports scores, videos, etc.  It also includes a camera for video conferencing between compatible amazon devices.

If you combined an Amazon Fire HD tablet and a less-powerful Echo, you would have an Echo Show.  Weighing in at $229, this device is Amazon’s vision for the future of smart displays. The Echo Show sports an HD display for video and informational content summoned by the user through Alexa, as well as a higher-quality 5 megapixel camera for video conferencing.  The Echo Show also includes the same Zigbee smart home hub included with the Echo Plus.

Not content to limit Alexa only to home devices, Amazon began working with car manufacturers to include the Alexa assistant in cars.  In 2017, the first cars with Alexa built-in began shipping to consumers. At present, Alexa is available in models offered by as many as 14 different manufacturers.  However, this only includes cars manufactured in 2017 and newer.  To allow older cars in on the fun, Amazon announced the Echo Auto in 2018, which connects to the auxiliary port on any car and pairs with a user’s phone.  Once set up, the Echo Auto allows drivers to play music, get directions, and even connect to smart devices like garage doors, all through Alexa.

What Features do the Echo and Echo Dot Share?

As Amazon continues to proliferate its growing portfolio of Echo devices, the Echo and Echo Dot remain by far their most popular devices.  So, as you consider which device is best for your home, and whether to pay the $50 premium for the Echo, consider the following features that the two devices have in common.

The biggest similarity between the Echo and Echo Dot is the access to Alexa and the accompanying library of smart home integrations (called “skills”).  Whether you opt for the Echo or the smaller Echo Dot, finding out the weather, how long it will take you to get to work, or turning on the lights on your patio will be an almost identical experience.  The power of Alexa’s skills cannot be understated, as virtually every popular smart home device in 2018 supports Alexa, including the Nest, Philips Hue, Logitech, Ecobee, Belkin, TP-Link, and Samsung SmartThings families of products.

Once connected to the smart home devices throughout your home, Alexa can sort everything into rooms, and then further into “routines”, which makes controlling many devices far more manageable.  Routines are especially helpful to automate frequently used actions, such as turning lights off late at night, or setting the thermostat temperature in the morning. Once you experience the convenience of simply requesting that Alexa turn off the lights upstairs, without actually needing to walk up the stairs, you realize that the time and expense invested in setting everything up was completely worth it.  In any event, the Echo and Echo Dot provide the same access to this deep functionality.

As mentioned above, both the Echo and Echo Dot have the same prominent light ring surrounding the top of each device.  This light ring is used to indicate the volume level of the device, when the “Alexa” command has been invoked, and even if the device is experiencing network connectivity issues.  However, more recently, Amazon has expanded this functionality to include a more traditional notification indicator signified by the light ring pulsing yellow.  These push notifications are disabled by default and must be activated through the Alexa App, but once activated on a per-skill basis, can do things like notify you when an Amazon package has been delivered, or when a pizza is on the way from Dominos.  The Echo and Echo Dot are both fully-capable of utilizing this feature.

As mentioned briefly above, Skills activated through Amazon Alexa can greatly expand the capabilities of an Echo device, whether using an Echo or an Echo Dot.  Skills are simply a different name for what most people associate with apps for their phones. Developers program a “skill” and host it with Amazon, where users then find it in the Alexa App.  Once the skill is activated, the Echo or Echo Dot gain new functionality. An example of this is the Logitech Harmony skill, which if paired with a Harmony home hub, allows you to control your home audio and video devices via voice control through Alexa.  Another example is the Dominos skill, which allows you to order a Pizza just by asking Alexa. All of this is available through both the Echo or Echo Dot.

What are the Differences Between the Echo and Echo Dot?

Turning now to the differences between the Echo and Echo Dot, they boil down to three main categories: Specs, use cases, and functionality.  Each of these are addressed below.

As mentioned briefly above, the Echo and Echo Dot differentiate themselves primarily by their physical size and ability to fill a room with sound.  Below are their specifications:

The Echo and Echo Dot have fairly distinct use cases.  Generally, consumers purchasing an Echo do so because they are looking for a device to be used primarily for music.  Indeed, with its high-quality speakers and Dolby certification, the Echo is one of the most popular choices for home speakers.

The Echo Dot, on the other hand, is a far better option for those users who are more interested in adding the smart home features offered by Alexa to their room, and may already have an existing sound system for their home audio.  This distinction alone may provide you with the information you need to make your purchasing decision.

The Echo further distinguishes itself as a music player with the additional functionality offered by Amazon through pairing an additional speaker and a sub-woofer for a more complete audio experience.  In addition to adding whole home audio capabilities to all its echo speakers, Amazon also added the ability to pair two Echos together for stereo separated sound in one room. In addition, Amazon released the Echo Sub, which, when paired with one or two Echos, offers a complete 2.1 audio system.  At the time this article was written, Amazon even offers a bundle with two Echos and the Echo Sub for $249.97.  Clearly, music is the selling point here, as the Echo Dot is not compatible with any of these features.

Both Echos and Echo Dots have been unbelievably successful for Amazon, and the reality is that for those who have adopted Alexa as their smart home assistant of choice, they will likely have one or more of these devices each, depending on which room of the house they are buying for.  What cannot be denied is the fact that Amazon has made smart home assistants and whole home audio both accessible and affordable. Hopefully the above information assists you in making a more educated decision when purchasing your Echo device.

About the Author: Brian Locker is an attorney by day and technology blogger by night.  A self-described nerd, Brian uses his love for all things tech to write content that is (hopefully) both informative and entertaining.  When he isn’t representing clients in real estate litigation or writing blogs on the latest home automation gadgets, Brian can be found spending time with his wife and two beautiful daughters in the suburbs of Atlanta, GA.