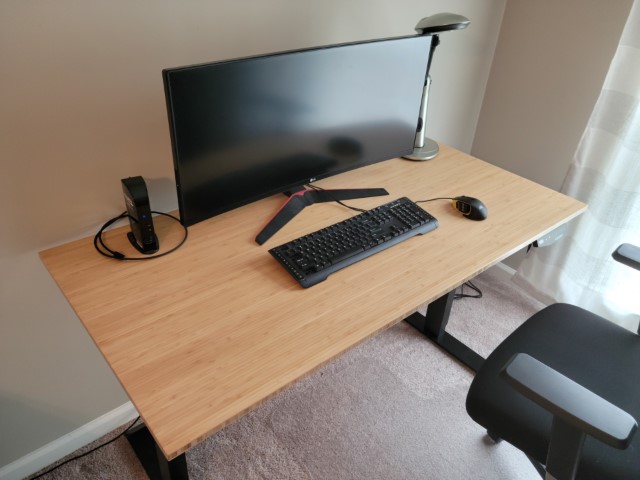 If you’re in the market for a no-frills motorized sit-stand desk, it is hard to argue with the value proposition offered by Flexispot’s Kana Bamboo Standing Desk.

Combining a rigid frame with an incredibly durable bamboo desktop, you’ll be forgiven if you mistake the Kana Bamboo desk with competitors nearly twice the price.

Below are my impressions of the desk’s features, my experience with assembly and general usage.

Editor’s Note: Flexispot sent us the desk free of charge, but did not review the content of this review before it was published, and the opinions in this review were not influenced in any way by the manufacturer.  Home Toys may earn a commission on purchases made through the links in this article.

The Flexispot Kana Bamboo Standing Desk offers a number of customization options when ordered directly from Flexispot.com.  The first is the shape of the bamboo desktop, which is available in both rectangular and curved configurations.

Some users prefer the curved desktop, which allows you to get slightly closer to your monitor and also comes with pre-drilled holes for cable management.  Both curved and rectangle desktops are available in 48”x24” or 55”x28” sizes.

Next up on the configuration options is the choice of keypads, which have basic and standard options.  The basic keypad allows for simple up/down movement.

The standard keypad provides a digital readout to confirm exact height, as well as memory presets for easy adjustment and switching between sitting and standing modes.

Finally, Flexispot offers their frames in a few colors, depending on the model you choose.  You will at least have the option of gray and black, but the Eco frame is also available in white.

Fortunately, we’re talking less like Ikea and more like Pier One/World Market.  The frame pieces are surprisingly heavy, which bodes well for the long-term durability of the desk.

Basic assembly of the frame took about 30 minutes, and the included instructions are fairly easy to follow.

One issue I ran into was that it was not entirely clear how wide to set the legs, and the instructions did not provide any detail in this regard, other than to specify that there should be no more than 7” of overhang on the outside of the frame.

It wasn’t until I went to attach to desktop that I realized Flexispot had pre-drilled holes into the underside of the desktop as a guide.  By that point it was too late and I simply drilled the provided wood screws directly into the desktop.

After attaching the frame to the desktop and hooking up the electric motor, total assembly time clocked in at about an hour and a half.  I probably could have done it in 45 minutes to an hour if I was less careful.

After getting all my computer peripherals setup on the desk, I tested the speed and strength of the included motor.

Overall, the desk operates well under load. I did have a problem when I raised the desk to its maximum height.  The remote control seemed to throw an error code, and the only thing I could do is lower the desk until I reached the lowest setting.

At that point, the motor seemed to “reset” itself and operated correctly thereafter.  This is obviously not something I would do under normal conditions, and it only seemed to happen when I raised it all the way up to the point it stopped, so It’s not a major concern.

The overall value of this desk is where I believe its major strength lies.  You’ll be able to find plenty of cheaper height-adjustable desks, but you’ll likely be sacrificing performance or material quality.

Conversely, there’s also plenty of options on the higher-end of the spectrum for sit-stand desks that include many more bells and whistles, more powerful motors, exotic woods, etc.

However, Flexispot seems to have a desk here that is “just right”, by including durable bamboo veneered wood on a sturdy steel frame for less than $500.

If you’re in the market for a mid-range height adjustable desk that feels solid, but won’t break the bank, you could do worse than FlexiSpot’s Bamboo Desk.

If you work from home or have the ability to choose your office furniture and haven’t jumped into the world of standing desks, this is a great way to get in without having to sell a kidney in the process.