Too Much: IoT, IoE isn’t Coming to Benefit You, the Customer

“I am gravely disappointed. Again you have made me unleash my dogs of war.” – Humungus, “Mad Max 2: The Road Warrior,”1981, Kennedy Miller Productions

Ah, the Internet of Things (IoT)/Internet of Everything (IoE) is going to be great … maybe.

Let’s see, the local utility company “allowed” me to install a smart meter and the damn thing won’t even talk to me!

Sure, it sends information somewhere; which is stored by something and used to??

I’d rather have my thermostat talk to my furnace.

Being so leading edge, I’d like my smoke/carbon monoxide detector to be able to send an alert to my iPhone.  While I’m at it, I’d also like smart door locks and an alarm/intruder system talking to my entertainment system and phone … just in case.  If I don’t pick up or respond in a minute, it calls emergency services and lets them know what’s going on.

Don’t need my refrigerator telling me milk is sour.  Kids will tell me that in the blink of an eye.

Don’t need the stove or microwave asking the refrigerator what’s for dinner … wife does that.

Don’t need my car talking to the house telling it I’m on the way home so crank up the heat/air and turn on the lights … there’s an app for that.

And while we’re on the car, I don’t want it talking to the manufacturer and police.  If I have a problem with the car, it will tell me – it’ll stop.  And if I’m going “a little over the speed limit,” it’s up to them to see me instead of simply texting me a ticket.

If the car wants to talk, it can talk to me; not to everyone else on the planet!

That’s a big part of the problem. Everyone wants IoT to come about … their way.

Humungus looked at the layout and said, “What a puny plan.”

The potential for these siloed, proprietary systems is almost limitless because we’ve got cheap sensors, cheap computing and cheaper communications:

The market (the real market) is sensor implementation in business and government, not the consumer eye candy. 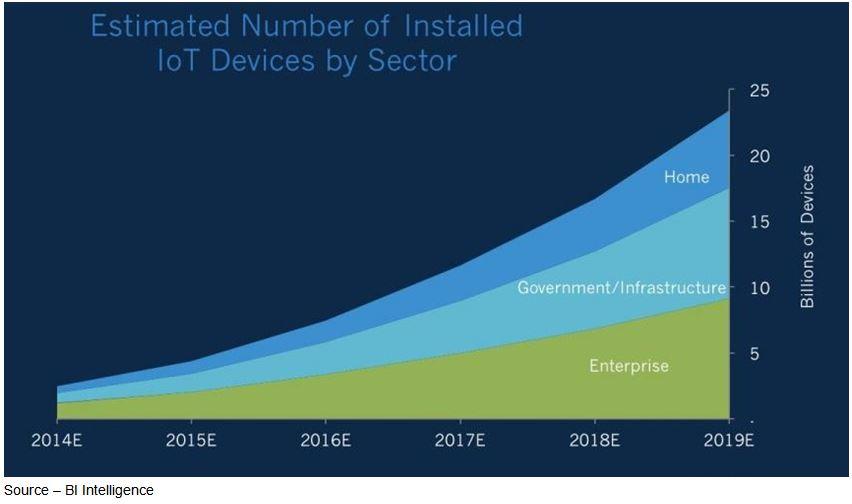 Constantly in Touch – IoT/IoE proponents envision a day when everything/everyone will be feeding information to everything/everyone else all the time.  Numbers range all over the map and usage can range from lifesaving to life risking and from practical to ridiculous.

It really can transform business and industry:

Along the way, no one asked the dumb person if he/she wants a little alone time.

You’re already connected with the PC, table, TV and phone that you use to connect with Facebook, Twitter, LinkedIn, and Instagram.  And you can shut them off and delete “most” of the social stuff.

But in the Orwellian world of IoT/IoE, things are going to get even better – take a pill and something sends something to your doctor about how it helped you.  Sensors under your skin or wearables will tell you how you’re “really” feeling.

Sensor Tracking – With sensors of all types everywhere – your devices, wearables, places, things – tracking and gathering data on every movement and activity will become increasingly common and easy.

Gartner makes it sound even better because in the not-too-distant future, people will be nodes in the giant global pulsing Internet

And why is that a good thing?

It’s good because all those Things can gather data and send it over the iNet to a central source where it can be analyzed/processed/categorized by machines and sold to/used by someone.

Does anyone seriously think that any of platform owners mentioned earlier are going to openly share their information with the other guys?  DUH–they want to own those customers, those things so they buy, install and use more of their IOT things.

Information utopians say that by globally sharing this IoT information/data we’ll be able to make better, faster decisions and we can control our environment better.

Data Flow – IoE will develop an unimaginably large stream of information and data about things and people—even larger than the Big Data we have today that we can’t fully manage, analyze, use, and protect.

We’re talking about sensors, devices, embedded networks, things that will send tagged, geolocated data to someone’s cloud that any hacker, hijacker or government agency can grab to locate, identify, monitor, control things that “interest” them.

You’re probably unaware that some of your smartphones and apps already send data to their manufacturer/developer.

Earlier this year, it was reported that LG smart TVs were so smart that the logged USB filenames and sent information on viewing habits to LG.  They have since changed things (or made them less obvious).

Microsoft's Xbox One plays its own game of watching the user.

That’s just the individual companies collecting and using the information. It doesn’t include the people who are tracking them.

Not sure how that improves, controls our environment, who “we” are, how we’re going to suddenly control “it” but the Gyro Captain slightly understood and said, “That's dishonest! Low!”

What about Darwin Award winners — those people who represent the best of our evolving species?  It could stop them from being culled from the gene pool so they don’t breed, multiply.

The big problem is we can’t agree on a definition for IoT or IoE. And it certainly isn’t as vast, wonderful as Neil deGrasse Tyson’s vision of the universe.

Universe of Potential – There’s a whole new world/universe just waiting to be totally connected in ways we can’t even imagine.  The ability to help people communicate at every level is exciting but there is a vast unknown that some of the connections may not be wanted by individuals and could actually be damaging, harmful to them.

We need to understand that it isn’t The Internet.  It’s a network of networks.  That’s the way it was originally designed … that’s the way it is today. You’ll have as much trouble building a new “neutral” one as you do keeping today’s network absolutely reliable, absolutely secure.

According to IDC, we already have about 5B connected devices; and by 2020, we’ll have 50B…all doing our bidding, making our lives better, safer.

All those connected objects will yield data on how machines and people interact with them.  The fact that they can’t manage the data they are already accumulating doesn’t bother them because more is always better.

The problem is it’s a gift that keeps on giving.

Take the Russian website that last year streamed live footage from private webcams, CCTV systems and even baby monitors to the world.

Ultra-black hats can run spyware on your device.  They can exploit protocol weaknesses to give them access to sensitive information. 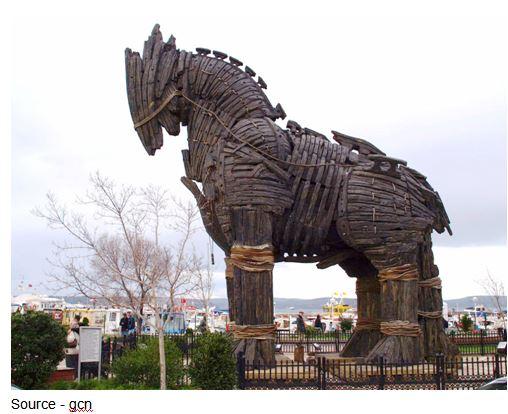 Trojan Horse – All of the wonderful connections, features and benefits being offered and bought up as quickly as possible hold the promise of a beautiful gift; but inside, there is a world of problems and issues that no one wants to tell you about.

Report after report finds that:

We’re rushing hellbent to a connected future and we don’t even understand what the IoT means.

Generally, it’s thought of as – “An advanced level of networked connectivity between objects, platforms, systems and services that enables the exchange of data without human intervention. The premise behind the IoT is that any object, whether natural or manufactured, can gain the ability to transmit data over a network.”

All of that with little or no attention paid to privacy or security.

Despite the issues and concerns, people will jump onboard the IoT/IoE horse because no one wants to be left behind and the Gyro Captain will only say, “You're not a coward. STUPID, maybe. But not a coward.”

But maybe the industry will take heed of Pappagallo’s words…“We haven't given up. We're still human beings, with dignity.”