Obviously, he or she is smart, a tastemaker, a visionary.  After all, the CIO understands innovation when it comes to or is presented to him/her.

If you’re not quite sure about the job, Wikipedia describes innovation – “a new idea, more effective device or process.Innovation can be viewed as the application of better solutions that meet new requirements, inarticulated needs, or existing market needs. This is accomplished through more effective products, processes, services, technologies or ideas effective that are readily available to markets, governments and society. The term innovation can be defined as something original and more effective and, as a consequence, new, that "breaks into" the market or society.”

Do you really have a clue as to what that says?

Writers and speakers do.

They use it in every other headline, every tenth word in a news release and every other conference presenter proclaims an innovation, engineers/product designers pitch it to their bosses. The CEO (Chief Executive Officer) tells shareholders/analysts the company is delivering true innovation to the marketplace.

When they’re really cool; they write, talk about disruptive innovation.

Now that is freakin’ awesome!

What is it really? 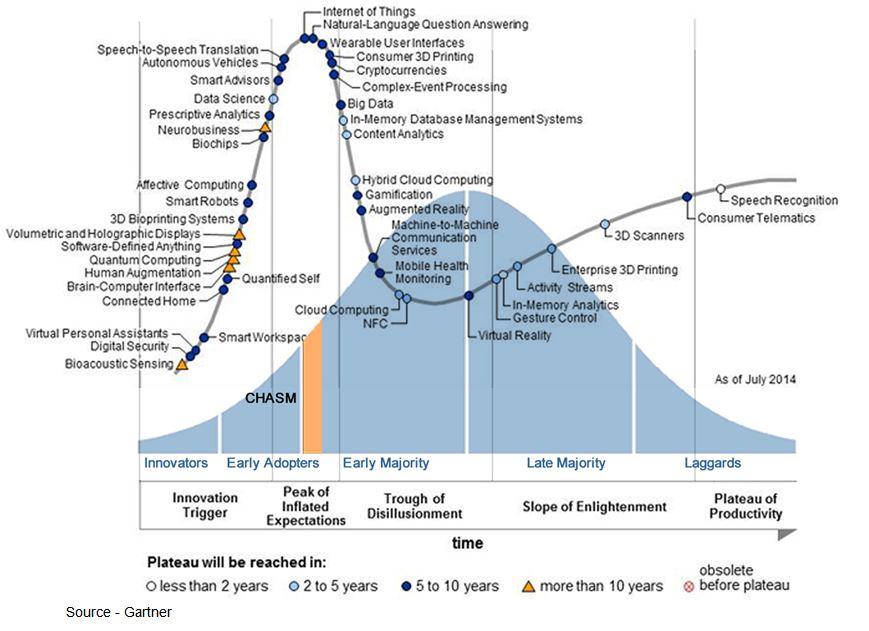 Outta’ Sync – Innovations and market acceptance are totally out of sync and they always have been.  Gartner’s hype cycle follows bleeding-edge users and media drumbeats while consumers adopt technology/products at a much slower pace which Geoffrey Moore described in his chasm.  The “innovators” abandon products long before they gain widespread sales/usage.

The problem is we have two bell curves – Gartner’s Hype curve and Geoffrey Moore’s chasm curve – and they are not in sync.

By the time most of us get what the innovation is, the innovators have forgotten about it and moved on.

We only know by looking in the rear view mirror if the new whatever is a good new or a bad new. If it fails, the innovator can say it was a good innovation but execution doomed it.  If it succeeds, the innovator can put another winner on his/her resume.

However, as David Ogilvy, a pioneering ad man, said; “In the modern world of business, it is useless to be a creative, original thinker unless you can also sell what you create.”

It was recently stated that startups find it tough to leap ahead because they don’t have the budget to innovate and have to focus on selling what they have in their catalog now.  After all, the real innovation, the disruptive innovation, takes years to replace products/services/processes already in place.

They’re a startup fer gawd sake; they get to start today while legacy firms/products have to drag their past with them.

On the other end of the spectrum is government R&D spending and market guidelines.

Investing in Tomorrow – A lot of people weigh the progress of innovation based on how much countries invest in R&D, but government spending in this area is best in basic research with the private sector and individuals taking the lead on delivering products/solutions for businesses and consumers.

China follows a state-led model. The EU (European Union) follows a “restrict outsiders and give our folks a chance to catch up” approach. And every country has trade restrictions and tariffs that protect local special interest groups, making it difficult for citizens to purchase the best for less … because.

China invests in sending students overseas to study in critical science and technology areas and then bring their expertise home.  Still a developing country, the government encourages industries and businesses to catch up with the West with a “similar but cheaper” approach.

Even though only one in 1,000 ideas may succeed, Chinese entrepreneurs are taking their own paths with unique inventions, unique approaches to solving problems rather than imitating.

Large firms like Tencent, Alibaba and thousands of others go against the grain and bet on big ideas.  Cai Fang, senior economist at the Chinese Academy of Social Sciences, defended the actions by saying, "We're at a big turning point from government-led investment to innovation based on free-market growth."

China is struggling to eliminate the political influence because they realize that all eight of last year’s Nobel Prize winners in science are of Chinese descent but are American citizens.

They realize that only by loosening the hold on technology idea developers can they entice them to come home.

Members of the EU know that but it just can’t resist when their citizens prefer foreign goods and services. Local entrepreneurs and companies struggle under government -imposed policies and laws that place rigid restrictions on the trial/error, hire/fire, succeed/fail start-up mindset.

Whether you want to call it creative solution development or innovation, it is always a bottom-up-driven process that is extremely messy. 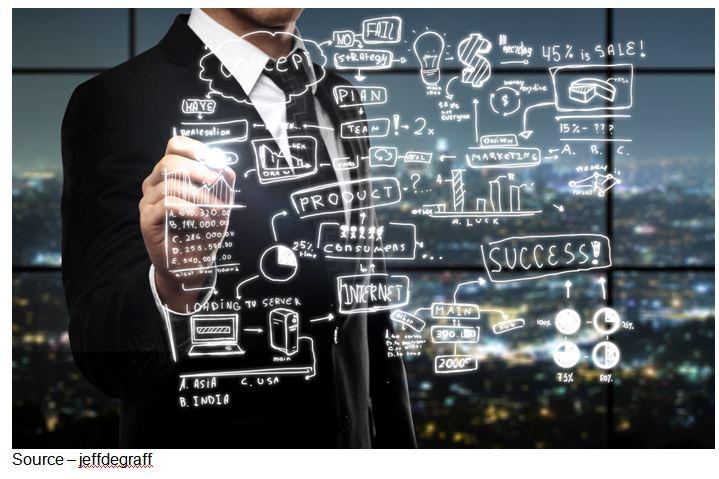 Not Flowcharts – Development and the introduction of new ideas, new technologies and new products doesn’t fit into neat flowcharts and can’t really be managed.  It’s a messy process that involves a number of failures and a few successes.  It is both a team and individual effort that leads to success.

Some like to tell us to think outside the box or get out of your comfort zone; but in any company, people need a box – corporate strategic direction – so they can focus their product/service/solution creativity.

Product, solution development/introduction is both a team and individual effort.

IBM was known for having multiple teams working on project ideas leading up to a final shoot-out where the best products became those that were ultimately produced/ sold.

Under Andy Grove, Intel developed a formula for production capacity allocation leading to which products would be produced, even when they ran counter to the company’s focus.  For the most part, the formula worked; winning over personal prejudices, preferences.

There’s a fine line between success and failure when teams are working on the outer edges of technology and products/services.

All too often, risk management is a key function in established firms. That often turns to making the organization risk-averse, so initiative and innovation become paralyzed.

Since corporate bureaucracy and risk management make it difficult for new ideas, new products, new services to bubble to the surface, it is often faster, easier, less messy to acquire a new idea startup or one that has a great solution but needs to be purchased.

The investors get what they want – cash-out profit.  The early team gets what it wants – cashout to jumpstart another idea or the financial cushion/expanded team to produce greater market penetration more quickly.

That’s the team part but the most difficult to qualify and quantify is the single, individual driving force.  You know people like Steve Jobs, Elon Musk, Jeff Bezos and hundreds of others who use sparks to start flames that may glow or turn into towering infernos.

The aha! person comes up with the products, fresh insights in a way that is messy, magical, borderline insane and terrifically insecure.  And they’re curious, persistent, positive, energetic, intrinsically motivated and their minds are sponges for new, different ideas. 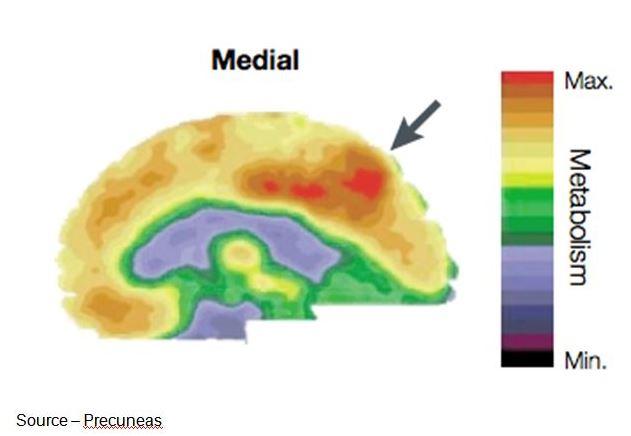 Thinking Different – Despite what many believe (in my opinion), it’s difficult to describe the innovative process or to teach it.  Your mind can work for hours, days or months on an idea or project until suddenly something clicks and it sits there before you … that’s innovation.

Of course, Salvador Dali simply said, “There is only one difference between a madman and me. I am not mad.”

The technology industry wasn’t built on consensus. It is managed by consensus.  Big difference!

The leaps in creativity and innovation come from the shortfalls, failures you seldom hear about.  As long as each failure produces a positive side effect, you know the company and the team are moving in the right direction. 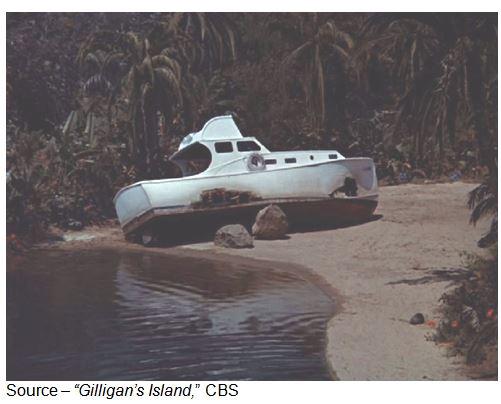 The Professor was smart enough to be the innovative leader on the island.  If he had focused on one creative innovation, he could have repaired the boat so they could sail home.

Instead, Gilligan heard him say, “I'm making notes for a book. It's to be a chronicle of our adventures on the island.”