“Transportation is a precise business.” – Frank Martin, “The Transporter,” Eurocard, 2002

“Jeezz, this thing is slow!”

Our son was complaining about downloading a TV show from Hulu.

It took about 10 seconds before it began streaming.

I bit my tongue and refused to say, “You think you’ve got it tough?   I can remember…”

I reminded myself that comScore recently reported that online ads have 5-6 seconds to be effective with millennials; and he’s not a millennial yet, so the time is probably less.

Vint Cerf, one of the fathers of the Internet, and his cohorts probably never envisioned a time when sending a message or picture across the country or around the globe would be faster than dialing a phone.

Or that people would have a panic attack when they didn’t have Internet access.

That global service is all thanks to a bunch of companies around the world that believe fast, reliable communications is vital for businesses and governments.

And our entertainment “almost” gets a free ride.

I was reminded of that when the 4,000-mile-long Microsoft/Facebook Marea undersea cable was recently completed – a year ahead of schedule – between Virginia and Spain.

It can transmit data at a whopping 160Tb/s (yes, it’s fast) and it was designed to carry even more data faster when new technology is available. 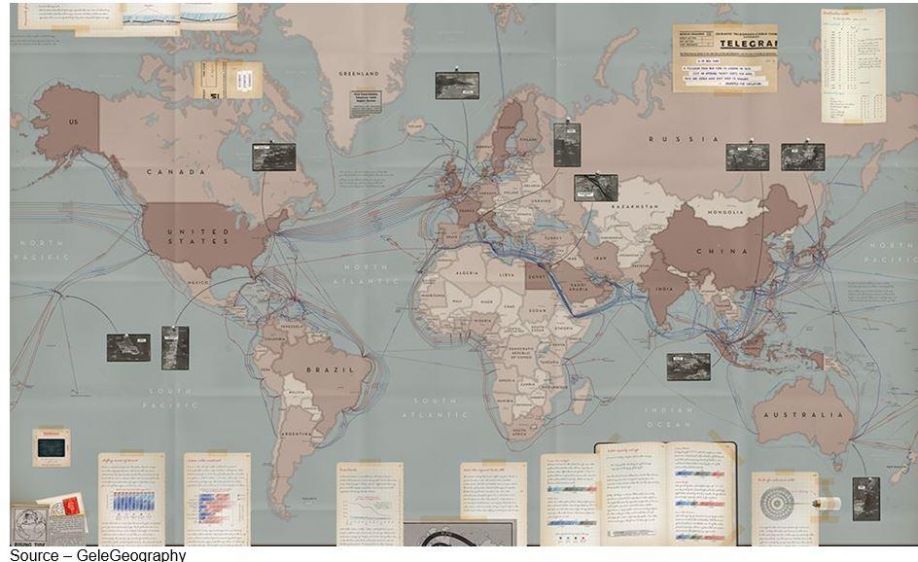 Deep, Fast – The Submarine Cable Map shows 293 cable systems that are active, under construction or expected to be fully-funded this year.  The map also includes up-to-date facts and items of historical interest to marine cablers, including journal entries and sketches.

All of the global majors – MS, Google, Facebook, TaTa, Alcatel, C-Lion, Orange, Global Crossing and others – have laid millions of miles of cable on the ocean floor.

According to the Brookings Institute, it was important because transatlantic cables carry 55 percent more data than their transpacific counterparts and 40 percent more than between the US and Latin America.

Those links are vital for getting data from one country to another.

Global Internet traffic in 2020 will hit 25GB per capita, up from 10GB a couple of years ago.

To create/receive that data, we’ll have 3x the number of devices connected to the iNet or an average of 3.4 devices per person (fixed and mobile).

My kid probably doesn’t think much about these shifting facts because like most pre-millennials, he never experienced the early days of Cerf’s work … it was just there!

Now it’s an ingrained part of our lives.

Or, as Mark Wahlberg says in a TV commercial, “Food, water, Internet, we need them to live!”

Of course, depending on who you are, there are different explanations as to what having Internet connectivity means.

In Britain for example Gerald Sharp, chairman of the British Infrastructure Group of the Members of Parliament, recently said; “It is unacceptable that businesses and homeowners alike still can’t receive fast Internet, and the lack of minimum standards in the sector represents a worrying picture for post-Brexit Britain’s competitiveness.” 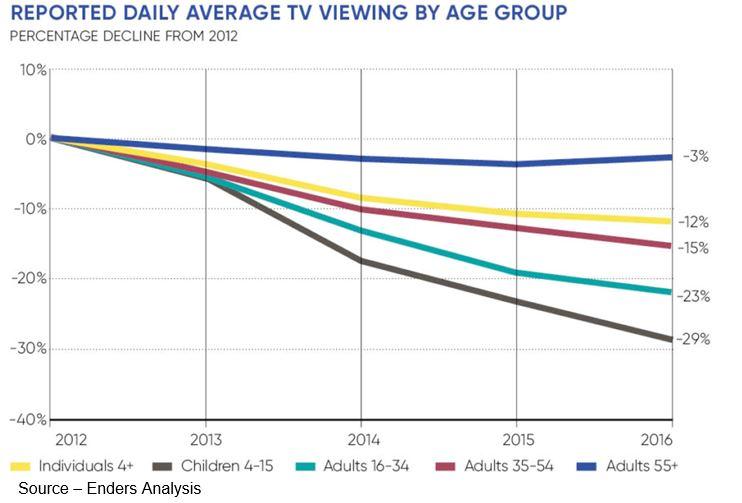 Fewer Eyeballs – With a growing number of screens available, people are personalizing their viewing by turning on and watching their entertainment on their smaller, individual devices.

Obviously, OTT (over the top) subscription TV services like Netflix, Hulu, Vimeo, Amazon Prime, Sky Q and others around the globe and their growing customer bases agree.

Or, as Cisco’s latest video content report noted, 82 percent of all consumer Internet traffic will be IP video traffic in a couple of years.

In addition to the stuff YouTube and Facebook users post and download as video entertainment, people around the globe have given up the artificial requirement of watching a specific TV show on a specific day at a specific time.

Internet video-to-TV has grown rapidly in the past few years and will increase 3.6-fold by 2020. 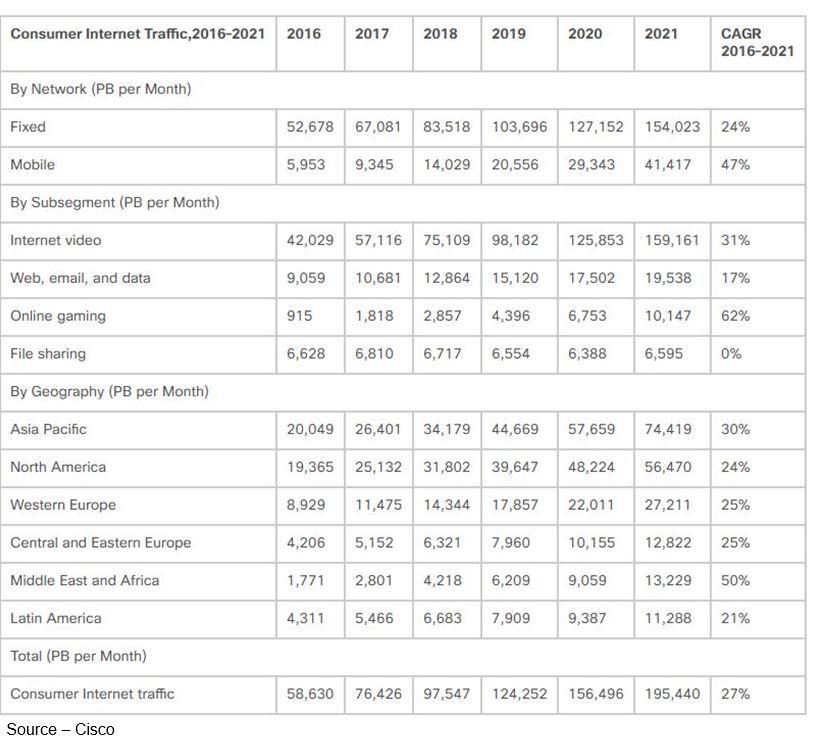 Domination – While the Internet was originally developed to enhance communications and the exchange of information, consumers quickly found it is the ideal way to share images and video.

Internet video-to-TV traffic will be 26 percent of consumer Internet video traffic by 2020, up from 24 percent in 2015.

Folks love their entertainment so much that IP video will be 82 percent of all consumer internet traffic.

Because the performance quality of video service by national IP service providers was spotty at best, it allowed a specialty service to emerge – CDNs (content delivery networks).

CDNs operate clusters of servers (content warehouses) around the globe to cache data for the content providers to reduce the delay before data transfer begins.

Or simply BAM! your video is there when you want it, expect it.

Bypassing Speed Bumps – Major social media firms and companies like Akamai have established their own content delivery networks and server farms located around the globe to deliver content that is richer, faster, better than when data is sent across conventional Internet Service Providers.

Firms like Akamai have taken center stage on being the video delivery service of choice.

Netflix, Google, Amazon and others use a mix of CDN services in addition to establishing their own.  The combination handles two-thirds of today’s Internet video traffic because people – no matter what your provider claims – don’t like their content to buffer, stall, flicker or do anything but stream.

Right to Suffer – For most people, the nice thing about viewing entertainment in the Americas is that they think OTT buffering is normal.  If you experience instant on, instant view in other areas of the world, you suddenly find out your streaming sucks.  Of course, there are areas where it is worse as well … much worse and less expensive.

How fast is fast and how slow is slow depends on where you live on the globe.

Singapore delivers an average speed of 55.13Mbps; while Sweden, Taiwan, Denmark, the Netherlands, and Latvia all posted speeds in excess of 30Mbps. Americans sit in the 21st position with speeds averaging 20Mbps, still slightly faster than neighboring Canada's 18.03Mbps, which places it 26th out of the 159 nations tested.

While an Internet user in Singapore could download an HD movie in a snappy 18 minutes and 30 seconds, an American user would have to wait an average of 51 minutes for the download to complete.

Washington D.C. has the fastest broadband Internet in the US, with an average speed of 28.1 Mbps.  Delaware is the only other entity in the US that exceeds the FCC’s (Federal Communications Commission) 25 Mbps threshold for minimum download speed considered broadband.

That’s okay, especially if you live in a metropolitan area.

Yes, But – People who live/work in metropolitan areas take high-speed broadband service for granted and it’s only when you travel to rural and remote areas that you discover not all connectivity is equal.

However, according to IHS Markit, 44 percent of people living in rural areas in India, China, Brazil, Japan, Germany, Russia, the U.K. and the U.S. don’t have broadband access available to them.

In the U.S., that means there are 62 million Americans in urban centers and 16 million in rural locations who can’t access fast internet.

The major challenge for governments and service providers is to agree on what fast internet means and standards of performance.

For example, “average speed” refers to the user’s normal usage speeds.  Often that is 30-60 percent of the rate advertised.

If you’re paying for 8Mbps, the average speed is 2-3Mbps.  Even the global broadband standard of 10Mbps usually provide 3-4Mbps service.

Both are well below sustainable fast broadband service performance guidelines.

None of this is a major concern for short-form content and mobile device users since the general rule is the smaller the screen, the shorter the content.

The television set continues to be the primary device of choice for watching video across all genres for long-form content (sports, news, documentaries, reality TV, comedies, dramas, and movies).

While the past government team in the U.S. felt it was important to give homeowners high-speed broadband (minimum 25Mbps), the latest head of the FCC (Federal Communications Commission) said folks in the country already had it.

To prove it, they changed the definition of broadband performance back to what it was several years ago … 3Mbps.

The NCTA (National Cable and Television Association) agreed and noted that most Americans had at least four broadband service providers.

But even then, that won’t solve your streaming dilemma because 3Mbps can’t be considered broadband but rather 375KB/s.

It allows you to stream low-quality Netflix, surf the web on one or two tabs; and well, that’s about it. 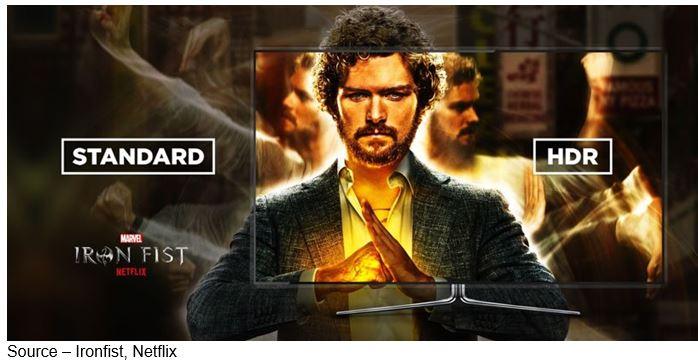 Better, Brighter – 4K content is quite a bit better than HD and HDR significantly enhances the viewing quality; but the improvement comes at a cost – more bandwidth usage.  To overcome the problem, firms like Netflix use advanced, bandwidth-conservative codecs to deliver entertainment to customers.

That’s why streaming services take advantage of CDNs outside the mainstream service providers.

Add HDR (high definition resolution) and your colors are deeper, brighter and richer but it raises the bar for broadband performance to 25Mbps.

To conserve bandwidth and improve streaming quality, Netflix, Hulu and most streaming service providers have upgraded from H.264 compression to H.265 – translation: it looks better and takes up less broadband space. 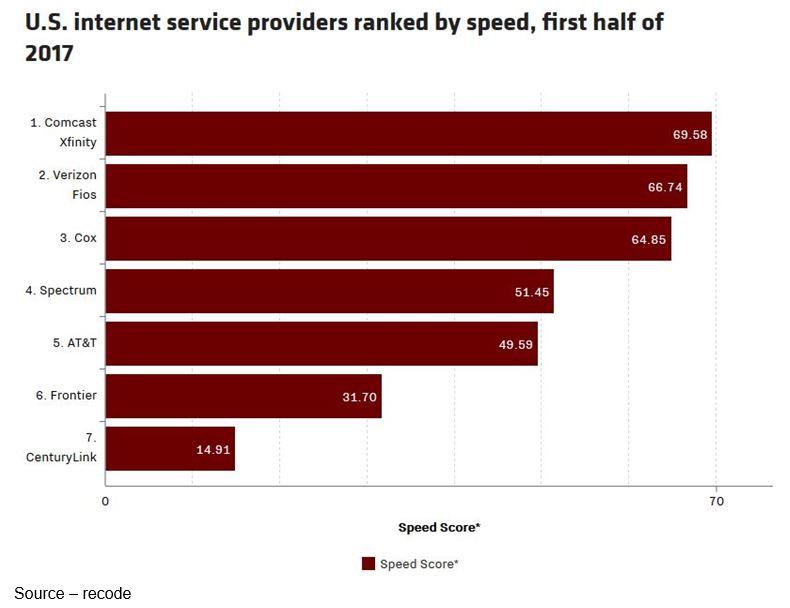 Love/Hate – Somewhat surprisingly, cable companies have also excelled at building out their networks so they are fast and efficient.  The firms are also moving from just providing big TV service bundles to become the leading Internet service provider for people across the U.S.  As technology improves, they will also be able to enhance content delivery.  The problem for consumers is that few areas have only one or two service options.

It’s true, internet speeds aren’t what they could be, especially in rural areas.

However, it should also be noted that most people in the US are blithely unaware of how broadband service works in other countries, where the prices are lower and the speeds are higher.

But around the globe, fixed broadband speeds are getting faster because of a rush to upgrade infrastructure.

The average U.S. fixed broadband download speed when tested this year was 64.17 Mbps (15th in the world), according to Internet Speed test company Ookla.

For our business, broadband connectivity is essential.

If you contract for a specific bandwidth performance and find out your provider is throttling back Netflix, Hulu, Vimeo, Amazon Prime or other subscription or free (ad-supported) services, then you have a legitimate complaint.

After all, as Frank Martin said, “Rule #1.  Never change the deal.”