There’s a good chance you may not have heard of Autonomic Controls unless you’re in the custom installation business. Their Mirage Media Server could change all that. I took an MMS-2 Media server (the MMS-5’s little brother) for a spin for several weeks and here’s what I found.

The MMS-2 is a 2-zone version of the large MMS-5 media server. It’s equipped with a 500GB internal hard disk, supports external USB drives, and can playback music from network devices such as NAS drives. (The MMS-5 will support USB audio input). As far as audio goes it contains a 5.1 channel HD audio processor (although 5.1 digital content is hard to come by, so I'm not sure how useful this will be) and a 24bit/96kHz DAC.

Other than power, networking and USB, it has no other inputs. For outputs, it has 1xHDMI (720p), 1 x analog stereo output and 1 x digital stereo output (TOSLINK). 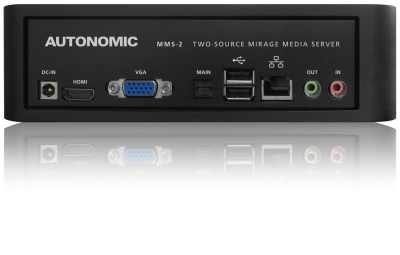 The server supports most digital audio formats, integrates very well with Home Automation systems and syncs with the cloud to boot.

The server has a minimalist design, with just an illuminated power button. In fact, you’d probably never guess it was a server. It’s pretty light at 3.5lbs, but having an internal hard disk it does generate a little noise. That said, given that it’s a multi-zone server, it’s probably going to mounted in a central rack somewhere.

Setup is a breeze: plug it in; fire up a web browser, point it at http://mms-2/config (the local management URL) and you’re all ready to configure it. Although, most of the configuration will be done by your installer, it’s easy enough to do yourself. The interface is polished an deasy to navigate. 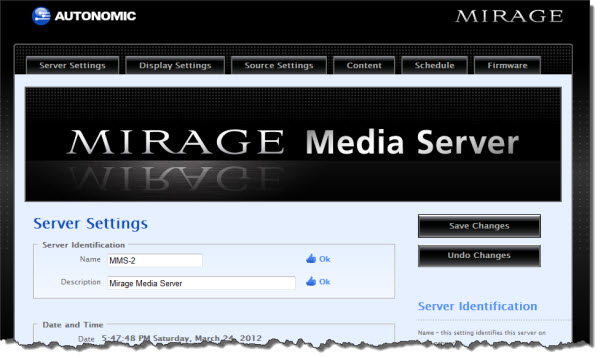 Head in the Clouds

Prior to the advent of iCloud, one of the Mirage’s most unique features was probably cloud synchronization via Amazon’s CloudDrive. It’s still a good feature, as not everyone has all their content in iTunes and not everyone uses iTunes, but it is now considered somewhat passé. My experience with iCloud has been less than stellar.

The one place that iCould does have an advantage is syncing to mobile devices. That said, with Mirage’s iTunes sync, you get the best of both worlds: all your content sync’d to the cloud for Mirage playback and your iTunes media on your iPad/iPhone. You may have to pony up $50-$100 a year for enough CloudDrive space, but that’s a small price to pay for having your music everywhere.

Is it a Media Server?

I’d question that. To me media implies audio and video. As far as audio goes it serves it very well. Not only does it sync with iTunes, it can scan NAS drives and sync with local content on your Mac or PC. It also supports a plethora of music services such as:

With respect to video: it has an HDMI output (720p only) and will display album artwork, but doesn’t actually play any video.

If you never leave the house, you probably don’t care about iTunes integration, but for many of us who listen to music on the go, it’s a way of life. Thankfully, the MMS-2 sync’s very well with iTunes—including playlists. The only downside is that it needs to sync with a local copy. Now if you have an always-on PC or Mac running iTunes (very unlikely on a yacht) that’s fine, but if you arrive at your holiday home and have to plug-in your laptop and wait for it to sync with iTunes, it’s a bit of a drag. That said, if you’re absolutely desperate to listen to that new Lady Gaga song you bought the other day on your audiophile system in your holiday chateau (OK, that’s a bit of a stretch), AirPlay will give you your fix while your iTunes library syncs. Once the server syncs with iTunes, you can safely shut off the Mac/PC, as your iTunes credentials are entered in the Mirage server for playback of DRM content; although, that’s really not an issue in the new post-DRM iTunes world. Obviously, iCloud support would be a more desirable solution.

AirPlay worked pretty well. There’s a bit of delay starting the song when you select AirPlay, but the same occurs with the AppleTV. The only disappointing thing is that it doesn’t show meta data. Artist, Album and Track all show “Not Supplied by Device”. I asked Autonomic about this and they said it's related to they're initializing AirPlay and they'd look into it. Presumably, it'll be fixed in a firmware update soon.

A Denizen of Home Automation

This is where the Mirage really shines and where competitors like Sonos shoot themselves in the foot, as they don’t provide any IR support and refuse to partner with home automation providers. In contrast, the Mirage has bi-direction IP control with a fully documented API. Furthermore, Autonomic provide GUI controls for AMX, Control4 (shown below), Crestron, RTI, Savant and URC. 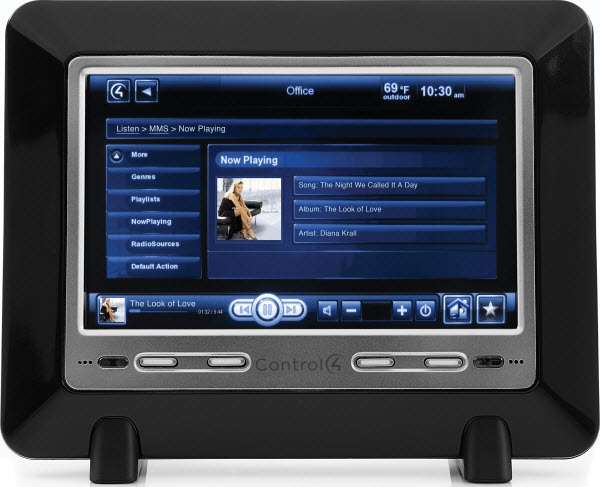 This is one of my biggest complaints of my Sonos system: there is no IR remote so I’m forced to use the Sonos controller, iPhone, or iPad (Sonos app or Home Automation app). Much of the time that’s not a problem, as I’m choosing music, shuffling tracks, etc. but when I just want to skip/replay a track or adjust the volume in a particular zone, having to grab the Sonos controller (I have five, but they never seem to be at hand) or doing the whole “swipe, wait, control” thing on an iOS device just doesn’t cut it. Bottom line, if I was buying multi-zone audio for one of the above-mentioned home automation systems, I’d probably buy Mirage instead of Sonos for this reason alone.

My one “complaint” on this note is that it’s not a rack mount device. An excellent Middle Atlantic shelves with a custom faceplate is available, but I’d take a 1u rack-mount form factor any day.  As you can see from the photos above, there are no controls (such as play, pause, stop, skip) on the device itself and there’s no IR sensor, so there’s really no reason for the box (as attractive as it is) to be visible or accessible. It’s highly likely that any installation is going to have a rack somewhere.

For those unfortunate, mal-connected souls without a Home Automation system, there’s a native iPhone and iPad app (shown below); although, these will set you back $20 for the iPhone and $50 for the iPad. For $50, I would like to be able to stream the content from my CloudDrive, especially if I don’t use iTunes. 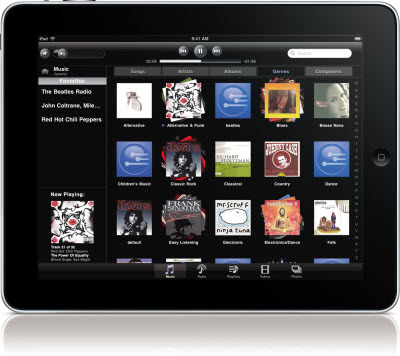 As if that wasn’t enough, there’s a desktop app and control can be accomplished via a web browser. It’s hard to imagine being more than an arm’s length away from something that can control it. An Andriod App is currently in development.

You may take this with a pinch of salt for two reasons: reviewers always get stellar support, and your support will probably come from your installer. That said, there is a support e-mail link on their website and any questions I had about the Mirage were answered quickly and intelligently, and clearly by a native English speaker.

The Mirage MMS-2 is a well-designed product. Audio quality is superb with its 24bit/96kHz DAC, especially when paired with uncompressed audio (such as FLAC or Apple Lossless). It integrates (via 2-way IP) with all the major home automation systems on the market and can also be controlled from iOS devices, a native app or a web browser. For those with second homes or large yachts, multiple servers can be sync’d using Amazon’s CloudDrive. I would question its moniker as a media server though, as it only streams audio. (Video will be supported on the MMS-5 via a firmware update in Q2 2012.)