Inside a Hi-tech Luxury Yacht

Yacht building company De Scheepsbouwers Maritiem (The Maritime Shipbuilders) has reason to celebrate: They have finished building yacht number 1,000! As this was a special project De Scheepsbouwers went overboard (not literally!) and designed and built a rather special vessel, named the Stevenvlet 1500.

This new design, which as well as continuing the companies long tradition of craftsmanship and attention to detail also contains a whole host of interesting innovations too. The Stevenvlet features a sturdy and elegant look, thanks to the modern colour combination of the hull together with the polished stainless steel deck fittings. The design is tailor-made for the 83 year old owner so contains many practical and comfort-enhancing features, such as a central vacuum system, and floorheating and air conditioning in the bedrooms. Another very nice feature is the panorama roof in the flight deck of 2.00 x 2.20 meters!

The interior and much of the exterior are completely custom-build and thus entirely adaptable to the specific wishes of the customer.

The ship is equipped with a Mastervolt electrical system with digital switching and all lighting is LED. The navigation and engine information is controllable and readable from two 19” touch screens.

Another example of the customization on the Stevenvlet is the A/V system that is built into the ship. Being new to the custom A/V industry, Scheepsbouwers were pleased to work closely with BMB Electronics BV – one of Europe’s most experienced custom AV suppliers. Considering the age of the customer the key point was practicality and ease of use, not ‘lots of flashing lights’. In order to achieve this ease of use, the Niles’ ZR-6 MultiZone Receiver, a six-source, six-zone system (expandable to 18 zones) was installed. This system incorporates everything needed to integrate iPod®, AM/FM, and up to five stand-alone sources into an advanced distributed audio system. Dennis van Beek, designer of the Stevenvlet chose the Niles system because “the system installs quickly because it comes preloaded with infrared codes and is simple to configure. The AM/FM tuner works right out of the box and you can incorporate iPod music players with no additional programming, just plug-and-play.” Dennis continues “for us it was the first time that we used a more extended A/V system on board of one of our ships and the Niles ZR-6 was ideal for us to start with. The keypads are also great because of their functionality, ease to install, and of course because they are weather-resistant, which is quite necessary on a ship.”

A TS-Pro and several Solo-6MD keypads were used on board. The

bright LCD display on the Solo®-6MD and colour touch screen of the TS-PRO keypad provide easy and intuitive operation of today’s menu-driven digital sources. The bright, high-contrast colour TS-Pro touch screen responds quickly to the touch of a finger and displays the artist, album, and song information needed to navigate a connected iPod® as well as station information for the ZR-6’s built-in AM/FM radio. “The TS-Pro is easy to install because of the automatic configuration when connected to the ZR-6. It has even more to it because with the system-wide control function you can control the local room, a different room, a group of rooms and even the entire ship” Dennis commented. “Notwithstanding the age of our customer, he still loves to throw a party every now and then. The party-mood from Niles’ system turns on all zones (or a preset number of zones) to play the same music source, instantly and conveniently, filling the entire ship with music. And when the party’s over, one touch of a button turns off all the zones.” 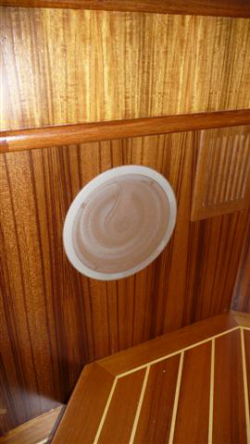 Two types of speakers are used on the Stevensvlet. Inside the boat Scheepsbouwers chose 2-way In-Ceiling Speakers from the new Ghost Series from TruAudio. Apart from the excellent sound quality, when installed Ghost models have a Micro-Reveal of only 2mm, plus the magnetic grills are 100% rimless, leaving a smaller ‘footprint’ than traditional In-Ceiling speakers. Because of the tight spaces in the owners and guest cabins, they have chosen to build in the speakers in the sides of the bed. “Because we painted the grills, the speakers are almost invisible, while still providing great sound. The magnetic grills are also a great and neat solution.”

On the outdoor deck Scheepsbouwers chose the weatherproof speaker from Terra. Terra manufactures their speakers in Maine, USA, where harsh weather and boating are taken very seriously, and Terra speakers are extremely well made to cope with the tough demands of an ocean going vessel. Terra’s advanced WIDE-FI™ models allow enjoyment of the full stereo experience from a single loudspeaker. Since both channels emanate from a single enclosure this alleviates having to find locations for two separate speakers.

To control all the appliances used on board, the team from Scheepsbouwers chose the MX-980i handheld remote from URC. Not only are the lighting, lift, blinds and screens controlled, but also the Niles ZR-6 system. Transparent to the client, the URC MX-980i routes commands three ways: line of sight IR, RF via an MRF base station or MSC Trigger to an MSC-400. For this ship, a combination was picked of the MX-980i with the MRF-350i base station. This combination offers a lot of possibilities, i.e. one macro step might command the TV lift to come up via line of sight IR, while the next step powers on the local TV via RF to a locally placed MRF-350i base station. Any audio video system, by its very nature, includes components with high speed microprocessors which produce wide band localized RF interference. The combination of the MX-980i Narrow Band RF Transmitters with the RFX-250 (included with MRF-350i) provides ultra reliable RF via the extraordinarily specific narrow band reception of the RFX-250.

The ship was introduced at the in-water HISWA Boat Show last September where it was enthusiastically received by both visitors and press alike. 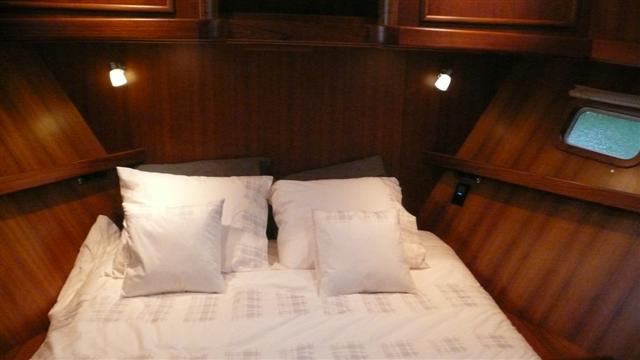