Blowing Hot and Cold with Z-wave and Wi-Fi Thermostats

My HVAC needs are simple. I live in 101 year old house that my wife and I bought 2 years ago. We don’t have central air (yet), and have radiant heat. So my thermostat requirements are simple: a single thermostat controlling a furnace. (I control my window AC units in the summer using Z-wave.)

A learning thermostat is no use for my needs. My consulting work causes my schedule to be all over the place. I can be at home on different days of the week and at different times on the days I am at home.

I installed my own Home Automation System (using HomeSeer and Z-wave) and use Kindle Fires, Logitech Harmonies and iOS devices to control it all. (More details are available here: Using the Kindle Fire as a Home Automation Touchscreen.) If I had the budget for a Crestron system or the like, and the programming and support costs that go with it, the integration with a thermostat would probably have been better. That said, I have some friends with big houses and pro-installed, connected thermostats and they’ve reverted to conventional units.

As I don’t have the budget for a Crestron (or similar) system, when I started my Home Automation project, I had one very specific requirement:

There’s no way I wanted to be without heat, TV, Music, or have the house unsecured/unprotected if something failed. With a slight exception (the Z-wave thermostat), I achieved all these goals.

I bought a DSC alarm system, installed it and integrated it with HomeSeer. It works perfectly and should the HomeSeer system be offline for any reason the alarm functions normally.

I use Windows Media Center with SiliconDust tuners for my TV and DVR. (I’m a cord cutter: you can read about that here: A Year without Cable.) . All my AV gear is in the basement (for first floor) and an upstairs closet (for 2nd floor) and is controlled with Logitech Harmonies. (I will be switching to URC with an MSC-400 controller soon.) I do not want this controlled by my Home Automation system, but I do want the lights to dim/raise when I play/pause/stop movies, etc. and the ability to turn on specific sets of lights from the Harmony One remote for bathroom/cocktail breaks. This works great and, more than a year later, still makes me smile when I pause a movie and the lights come up, then dim again when I press play.

For music, I use Sonos. I initially bought a basic system with two zones and controller. I now have six zones (soon to be seven), three CR100 controllers (they got real cheap when the CR200 came out) and can control it with my iOS and Android devices too. Originally my system was distributed, so Sonos fit the bill perfectly. After buying the “new” house, we gutted the first floor, stairway and second floor hallway. A semi-finished basement and lots of knob and tube wiring, presented the opportunity (and need) to rewire the entire house, so I home-ran everything and ran lots of conduit from basement to attic for future needs.  Because all the speaker wires are home run (largely because of passive in-wall and outdoor sub-woofers), I could easily install a multi-channel amp to reduce the footprint of the music component. Given that I already had the Sonos system and love it (and the fact the company has a singular focus), there’s a good chance I’d buy Sonos again if I was starting from scratch. The Sonos system is integrated with HomeSeer, primarily for the purpose of having it muted when the bedtime and away events (alarm armed away, etc.) are run. It also mutes the music, makes text to speech announcements when stuff happens around the house, and then resumes.

This is where I inadvertently strayed from my philosophy. I bought a 2GIG CT30 (which is actually a re-branded Radio Thermostats product with a Z-wave module). The reason for the choice was that it didn’t require a C-Wire, and I didn’t have one, so it would run off batteries. It would supposedly run off batteries for 6 months or so (and it did)

So, I installed it, joined it to my Z-wave network and then discovered a few limitations:

Despite the above, I continued. I bought a HomeSeer plug-in to interface it with HomeSeer. This worked well. I could configure an unlimited number of schedules and adjust the temperature from my mobile devices. The set point was lowered when the alarm was armed away and raised when it was disarmed (if we didn’t raise it from a mobile device before coming home). When we were away for the weekend or on vacation, I simply ran my vacation event and it set to a low temperature until we returned.

The lack of control from the thermostat itself and reliance on the Home Automation system being up, meant it was time for a change this winter. There were a few other factors that drove the decision to change.

With more experience under my belt, I was able to set some clearer requirements.

Z-Wave or Wi-Fi
The CT30 with Z-wave worked OK, but status was never accurate and when there were issues with network or server, I had no heat. No fun if you have to get up for a flight at 4:30am in Chicago in the middle of winter.

None of the shortcomings were due to Z-wave itself, jus the implementation in this product. So the big decision was to stick with Z-wave or move to Wi-Fi was the big decision. I either wanted a Z-wave thermostat that did not have the limitations of the 2GIG device or a Wi-Fi model that would integrate with HomeSeer. I found it very difficult to get accurate information on exact feature sets.

The CT30 I had supports USNAP modules, so I could just switch out the Z-wave module for a Wi-Fi version. A HomeSee plug-in developer had created a plug-in that worked with a Wi-Fi version of the CT30, but I was so disappointed with my CT30, I didn’t want to entertain anything from the same manufacturer, or so I thought: turned out I was flat out wrong about that.

I’d seen quite a few Wi-Fi controlled thermostats (like Nest) and they all had pretty cool apps, but if I was going that route, I absolutely wanted something that would interface with my Home Automation system (primarily to override settings based on alarm conditions).

Should I get back on the Z-wave horse?

I heard good things about the Honeywell TH8320ZW1007/U. I read the installation guide and it did allow the schedule to be set locally when joined to a Z-wave network, and remained operable via the unit. It seemed to meet most of my criteria, but my gut was still telling me to go for Wi-Fi.

I started my investigations of Wi-Fi thermostats, and looked at several different products. I was shocked to find that all of them, except the Radio Thermostat products, either had no public API or were dealer-only products. I really didn’t need a $250 thermostat like Nest, but would spend the cash if it met my needs. I found someone’s reverse engineering of the Nest protocol, but that could break in an instant with a firmware update. Ecobee (another $200+ product) promised an API at the end of October, but having worked in the software industry for many years, I know how these things slip, or worse, get shelved or canceled. Every other vendor I found or contacted required you to use their portal exclusively (and usually for a fee) or had no API. Radio Thermostats was the only one that I found with a public API, and they had the trifecta:

It looked like Wi-Fi had won the race. I decided to see what it would cost to swap the USNAP module for a Wi-Fi version. I didn’t mind speculating $20-30 to try it out. I was shocked to find that the Wi-Fi module costs over $70, which is almost 70% of the street price for the entire thermostat.

I was chatting to the developer of the HomeSeer plug-in (Beakerstat) for the Wi-Fi version of the CT30 to see if his plug-in, coupled with the CT30, would meet my requirements. He’d never tested it the way I wanted to use it, so he offered to mail me a spare Wi-Fi module that he had if I was willing to test for him. Naturally, I agreed.

Configuring the iOS app was a breeze too.

Once connected, the device configuration and schedule can be viewed/changed, and ad-hoc set point and mode adjustments can be made. The app work flawlessly when connected via the local network or via a cellular data connection. 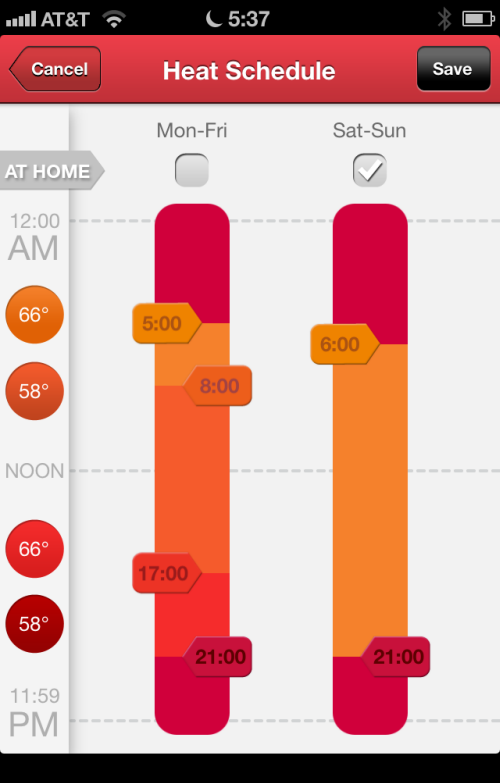 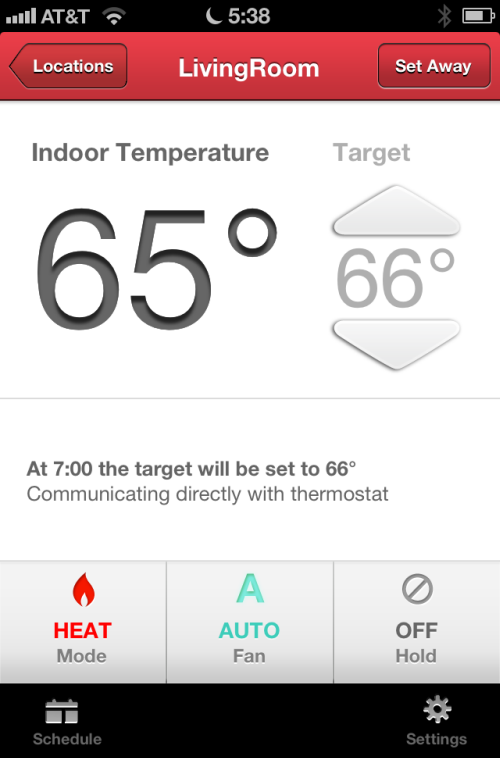 The web portal is equally well designed. There is a free service that allows control of the thermostat.

A very reasonable $25 a year gets you the premium service, which is valid for up to 5 thermostats in your account. This includes:

Was WI-Fi the Right Choice?

For me, yes. I’ve been using it now for about 4 weeks and it works great. WAF is through the roof, which will help with future project budgets. I’m very happy with it too. I have control via a polished app on my iOS devices and integration with my Home Automation system. The two work in perfect harmony.

A gut feeling steered me towards Wi-Fi, but I was shocked at how few products were available with open API’s. For people on a regular schedule, a learning thermostat may be adequate, but with an erratic schedule like mine, it would be hopeless. By integrating with my alarm system (via HomeSeer), I don’t have to do anything different to get optimal energy savings. Most importantly, it met my main goals: it can operate independently of Home Automation system (if required) and can be controlled fully via the unit or the iOS app. At just over $100, and zero subscription fees, it’s a great deal and I’d highly recommend the product to anyone. For those using HomeSeer, the Beakerstat plug-in I’m using works great too.