With advancements made in Megapixel technology, IP Cameras have increasingly become part of the residential and commercial security environment. These Megapixel IP Cameras deliver significant enhancements over traditional analog cameras.  At the same time, they require considerable network bandwidth and power—which, when attached as part of the wired network, is typically a non-issue.  But what about those occasions where a Megapixel IP Camera is needed in a remote location with limited network access?  It used to be that there were only two viable options for reliably delivering sufficient bandwidth:

Today there is a third alternative that is much friendlier to the installer and to the wallet—Wireless Bridging.

What is a Wireless Bridge?

Simply think of a wireless bridge as an Ethernet cable that runs over the air.  It is a way of using two or more wireless access points (APs) to broadcast data from one point to another. A wireless bridge can be implemented as “point-to-point,” with one root AP and one client AP (see Image 1); or as “point-to-multipoint,” with one root AP and multiple client APs.  Once a connection is made between the APs, the client AP can then be connected via a standard Ethernet cable to a switch and/or other devices for delivering network connectivity to the remote location. 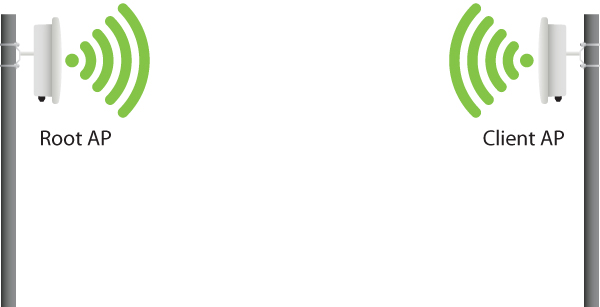 What are the Benefits of Wireless Bridging?

Wireless bridging has been around roughly as long as we have had wireless networking. However, the offerings for use in home and small business have historically been limited, not to mention expensive and difficult to install. As wireless networking has become more a part of the home and business landscape, the offerings have grown exponentially. Now it is possible to run a wireless bridge with good bandwidth at distances of a mile or more with the right equipment and environment. This opens a whole new world of possibilities that we did not have just a few years ago. For instance, we can now run a connection from a residence to an entrance gate without disturbing the landscaping, structures or even requiring another power source. We simply install two access points (AP’s) running in bridge mode to pass data as if it were a length of Ethernet—removing the need for expensive cabling and trenching.

One of the biggest challenges with using Megapixel IP Cameras in a wireless environment is bandwidth. For example, a 3 Megapixel camera running MJPEG with a medium quality video at 10 Frames per/second (FPS) requires around 16.8 Megabits per/second (Mbps) of throughput. Recent technological improvements, such as the new H.264 encoding method, has made the use of wireless a more viable and attractive option. For instance, at the same settings listed above, with H.264 the camera now only requires 3.4 Mbps of throughput—making it possible to connect even multiple IP cameras over a single wireless bridge.

While installers should consult the user manual of the specific IP camera being used, Table 1 below is a rough guideline of how much bandwidth is required based on various IP camera settings, encoding method, etc.

Table 1: How much bandwidth do you need?

Let’s take the case of a large estate owner wanting to update the security system. The system will control the main gate access to the property, which is located at a distance of over 1500 feet from the residence. Currently there is an intercom system, but the owner wants to see as well as hear any visitor requesting entry.  There is a problem in that the owner’s wife has a garden of prize winning roses what would be the middle of any cable run out to the gate—making trenching an undesirable option. Plus, there is no power along the length of the run to allow for placement of an Ethernet repeater or switch.  In this case, wireless bridging comes to the rescue. For purposes of this installation, a Luxul XAP-1040 outdoor wireless access point will be used as a bridge root located at the residence, while a XAP-1050 (see Image 2) will be used as the bridge client at the gate. The Megapixal IP Camera will then be connected via an Ethernet cable to the XAP-1050—which provides both power and data to the camera through an external PoE port. We now have a reliable link between the home and gate—while installation time and costs have been reduced and the rose garden left undisturbed. 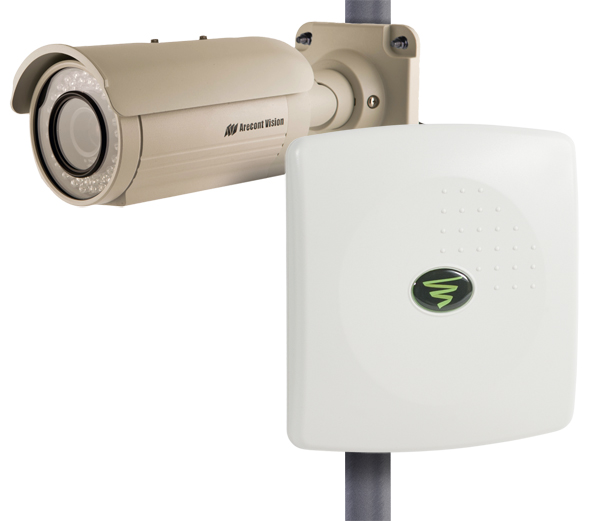 With more stable connectivity and higher throughput rates, the current generation of wireless networking provides a solid platform for extending the network reach and creating long distance bridges. And, due to improved compression technologies, IP cameras are becoming a fantastic solution for use over a wireless network. Together, these technologies are helping installers deliver more powerful, cost-effective and flexible security solutions.