The orchestra pit, for example, typically has lots of cables running every which way, making it hard to set up and even harder to test. Slaton responded by partnering with northern California’s Energy Transformation Systems (etslan.com) to design and manufacture an easy-to-use and easy-to-install audio accessory they named the InstaMusician™.

Known as a balun (i.e. “balance/unbalance”) the InstaMusician is similar in design to the company’s popular InstaSnake™ which actually replaces cumbersome and expensive individual microphone cables with a single run of common Cat5 cable. Slaton worked with audio expert Harry Platt, who one day suggested running video down shielded Cat5, carrying a discrete signal on each of the four pairs of the Cat5 cable.  The result for the designer or installer is having the luxury of three balanced audio lines, along with a single separate video line. 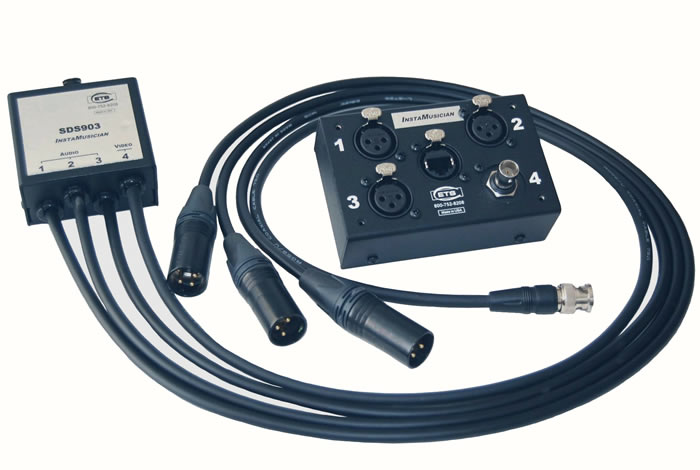 In a typical installation, by placing an InstaMusician at each musician’s stand, you then have up to three microphone lines, plus a video line, (which is usually used for the conductor video view). Amazingly, you could use a turn-around (a so-called “gender-changer”) on one of the XLR lines to send a monitor signal to a powered speaker. Best of all, this can be dependably and inexpensively accomplished over a single run of Cat5!

Slaton adds that he has used the InstaMusician as a problem-solver on the national tour of Bullets over Broadway, on two of the national tours of Elf, and on the international tour of Shrek the Musical. The result, perhaps for the very first time, is an orderly orchestra pit that is both easy to cable and a breeze to troubleshoot!

In this connection, he cites the work of an audio expert friend who is using an InstaMusician to mic a chorus position. By running one shielded Cat5 to a chorus booth, he has gained a microphone line, a monitor feed, a conductor video line, and a spare line. Says the amazed Slaton, “How much more cost-effective can you get?”

It should be noted here that the InstaMusician is now available from ETS in two models, depending on the installer’s needs. The Model SDS903 is a 3-foot tail set (pigtail-style) of three XLR’s and a single BNC. The Model SDS904, on the other hand, is a box with three female XLR connectors and one BNC. The electrical performance of the two configurations is identical. 446

About Energy Transformation Systems, Inc.
ETS is a "specialty manufacturer", making devices that convert between different systems, different kinds of signals, old and new technology. We manufacture products that make audio, video and security systems "more efficient". Many of these devices convert traditional signals to run on data cable, Cat 5 and Cat 6. We are really making inroads into the dramatic and musical stages, especially in New York, that are using many of our devices because they are so simple, so effective and so reliable. Almost all of our boxes are passive, meaning no power is needed, which increases the simplicity and reliability.