Determining the resolution of an image used to be easy.  In flat panel displays you counted the number of full-color pixels composed of RGB sub-pixels.  In projectors, the count of the imager elements determined resolution.

Well times have changed.  In flat panels, architectures are now common that use sub-pixel rendering algorithms to display color pixels from red, green, blue and white sub-pixel elements.  In the projection world, image shifting optics now allow the rapid display of two slightly displaced but complementary images that together increase the perceived resolution beyond that one would think possible based on the imagers in the projector.

These techniques have mainly been developed as cost saving scheme but they can also sacrifice high spatial frequencies resulting in a visual loss of fidelity on letters and detailed images.  Figure 1 shows a conventional RGB stripe architecture on the left while on the right is an RGB architecture where the sub-pixels are not aligned vertically.  This architecture may not have much impact on video content compared to the RGB stripe version, but it can impact fidelity on static images. 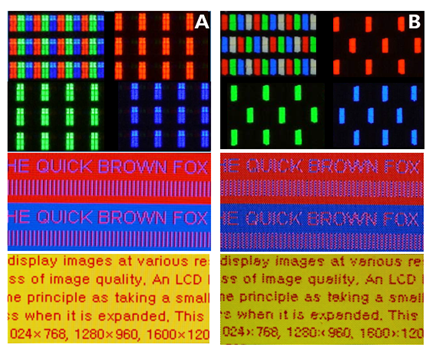 New methods to measure resolution are needed.  Recently, Samsung proposed a method that builds on existing contrast modulation methods and leverages the concepts of Structural SIMilarity (SSIM) to evaluate the resolution of flat panel displays.  SSIM is a common metric used in the video and movie encoding industries to test and compare different compression schemes.  As far as we know, this is the first time it have been applied to try to determine the resolution of a display.

What is Contrast Modulation?

In the CRT days, a Cm value of 0.5 was generally considered to be the threshold for the determination of the resolution of the CRT display.  This concept has been applied to flat panel displays, although there is some disagreement among metrology professionals as to what value of Cm should be used to determine resolution.  Resolution in the horizontal or vertical direction is determined by counting the distinguishable peaks (i.e. above a certain Cm threshold).

Contrast modulation works well in conventional RGB flat panel architectures.  That is, one color pixel that is composed of red, green and blue sub-pixels that are arranged horizontally in neat and aligned rows and columns.  Resolution in these displays can simply measured by counting the RGB sub-pixels horizontally and vertically.  But applying the contrast modulation scheme works quite well too.