The Power of ZigBee 3.0 – All about the new and improved ZigBee 3.0

Two years ago there was a lot of discussion about the different radio technologies that would be useful for the IoT. Some companies advocated that WiFi and Bluetooth would be sufficient, while other companies were starting to push IEEE 802.15.4 (the underlying radio technology for ZigBee and Thread). Actually, the majority of today’s networking technology decision makers are now comfortable with and fully understand that the IoT will use all three technologies for different applications.

To address the weakness of WiFi (compared to ZigBee) an activity was started to standardize low-power WiFi (IEEE 802.11ah). Although activities in this area are still proceeding and may lead to a standard, the worldwide acceptance will be very doubtful. This standard is not universal, because we will have different specs and flavors in different regions in the world. Adding to the challenge is the fact that even though this new low-power standard is called WiFi, it does not have any compatibility with “real” WiFi. It is a completely different radio and MAC technology. So why not use IEEE 802.15.4, which is already a universal standard and provides all the features the developers of this new low power WiFi is struggling for? This new flavor of “WiFi” does not make much sense.

Bluetooth, as an IoT standard, has a critical weakness – it was designed as a point-to-point cable replacement technology – not a networking technology. To address this weakness, some companies have started to work on a network layer for Bluetooth (‘Bluetooth Mesh’) but they face serious challenges. Previously, many industry networking engineers have seen similar mesh networking attempts fail. For example, IEEE 802.11s exists but is hardly used, and implemented only a single hop mesh topology (repeater). The key problem is that latency cannot be controlled when supporting multiple hops. So, the skepticism amongst network technology engineers around the new Bluetooth Mesh story is really no surprise.

So, bottom line, the worldwide wireless market has accepted three core IoT radio technologies, IEEE/802.11/WiFi for content distribution as we are all familiar with today, IEEE 802.15.4/ZigBee for sentroller networks like Smart Homes and Bluetooth, including Bluetooth Low Energy, for connectivity, personal area networks (around the smart phone) and wearables. The first two connect devices in your home to the internet, the last one mainly uses the smart phone for internet connection.

A variety of cross-over radio products are already available from multiple suppliers: WiFi/Bluetooth, ZigBee/Bluetooth and WiFi/ZigBee/Bluetooth. They all may not be at the right price point yet, but the underlying message is clear: there are three large open worldwide uniform radio communication standards that are the cornerstones for the IoT. That is the good news. 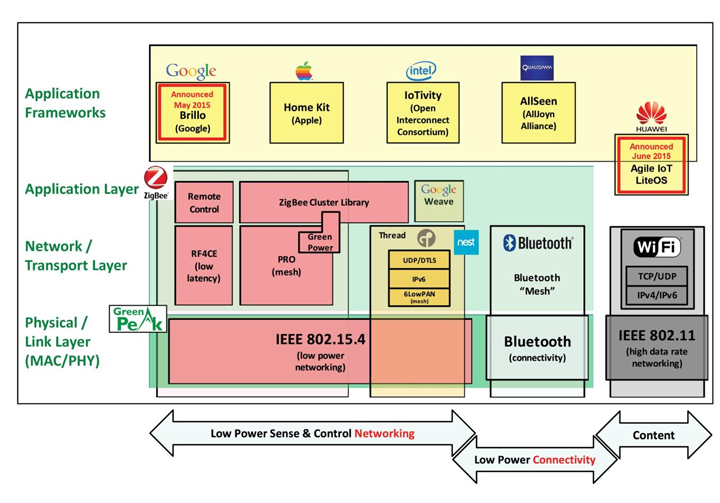 Now the not so good news. New confusion. Over a decade ago, after the competing radio technology conflicts ended with WiFi becoming the winner (and HomeRF and several other technologies disappearing), a new technology war erupted around the networking and application layers. Today everyone is familiar with TCP/IP – and even if you have never heard of this technology, you are using it to communicate via the web and local networks. But to get to this stage, a battle was fought between multiple networking standards: Novell Netware (who remembers?), Banyan Vines, Microsoft LanManager, IBM SNA, etc. In those days, it was as if almost every large electronics company felt that they had to make their own personal imprint on history by defining a network layer technology.

Frankly speaking, that is what is happening today in the IoT and Smart Home spaces. Again. Apparently, many of our industry leading companies have not learned the lesson that standards wars harm and slow down the adoption of new technologies. Apple HomeKit, Google Brillo, Qualcomm Alljoyn, Intel IoTivity and most recently: Huawei LiteOS, from the Chinese side of the house. All of these emerging application frameworks are now competing to get industry mindshare and to become the “leader in the IoT”, expecting the world to follow suit.

There is one more layer of confusion. Next to the application framework layer, there is a battle going on at the networking level. The clear contender is ZigBee 3.0 with Thread as the challenger. But even more confusing is that several key players in the Thread Group (like Freescale, ARM and Silicon Labs – notably all semiconductor companies) also have prominent leadership positions in the ZigBee Alliance (yes, it is a promiscuous world), so it looks that these technology companies are somewhat confused themselves…

Thread was announced late last year, but is still under wraps today. One can only guess what will be in there – but from what is leaking out it appears that it will be a real challenge for Thread to rise to the level of being a strong contender against ZigBee 3.0. That should not be a surprise as ZigBee 3.0 has incorporated years of experience in many application domains (lighting control, home automation, building automation, retail, etc.). With ZigBee, a very solid certification program is already up and running, test houses are signed up, and more than 1,000 ZigBee products have been certified. ZigBee has clearly become the technology of choice for many of the world’s IoT and Smart Home system makers. ZigBee also offers powerful ease-of-use features and strong security protocols. This is a major challenge to implement as sensors and edge devices usually do not have keyboards to enter security codes.

On top of that, ZigBee 3.0 supports an application library that has lived through multiple iterations of maturation. Therefore, it is no surprise that the Thread Group is seriously looking at adopting this ZigBee application library to run over Thread as well. But there is more: (1) ZigBee 3.0 is strongly anchored in the CE world with ZigBee RF4CE and (2) also includes the ZigBee Green Power feature. Let’s give this a closer look.

ZigBee RF4CE was initially developed in the consumer electronics space to replace the Infra-Red (IR) remote controls with radio-based remote controls, so that aim and click would no longer be required. But since then it has significantly evolved, and in its latest version (ZRC 2.0), it is fully integrated with the ZigBee application library. This means that a remote control designed for a TV or a set-top box can also control lamps, lights, curtains, sun shades, etc. in the home. The expectation is that over time, the consumer electronics space and the Smart Home space will continue to overlap and merge, and ZRC 2.0 is well positioned for that.

ZigBee RF4CE continues to provide full backward compatibility with the legacy IR space. ZigBee remote controls can automatically detect and download the required code-sets for legacy equipment that requires IR. Because of all these features, as well as its international acceptance, it is not a surprise that RF4CE makes ZigBee a key enabler for the Smart Home, and that the Smart Home is a major new service opportunity for the cable and TV operators!

In addition to ultra-low power requirements (comparable to Bluetooth Low Energy, but with much better range), the key value add of ZigBee RF4CE is its low latency. User interface devices benefit from low latency, because they enable product builders to provide the user immediate feedback (usually required to be less than 30 milliseconds). Normally meshing networks (including Thread) tend to see latency going up to hundred milliseconds or more, making the user experience quite unpleasant. Almost everyone has had the experience of pushing a button, nothing happens, and then pushing the button again: the light finally turns on and then, immediately turns off again. Arggh! That is not what happens with a wired light switch today, so nobody needs to accept this just because “now it is wireless”. Being able to add low latency human interface devices to the network is very key for ZigBee.

ZigBee 3.0 also includes ZigBee Green Power. ZigBee Green Power was originally developed as an ultra- low power wireless standard to support energy harvesting devices. Energy harvesting devices are devices without batteries that are able to extract their energy requirement from the environment (e.g. motion, light, piezo, Peltier, etc.). The most common application is the light switch, where the flipping of the switch generates the energy to send a communication package (“on”, “off”, etc.) through the air and to the lamp. Green Power is especially effective for devices that are only sometimes on the network (when they have power). Green Power enables these devices to go on and off the network in a secure manner so they can be off most of the time.

As an ultra-low wireless technology, Green Power is also a very effective option when using battery powered devices as it enables them to run off a battery for years. Green Power also allows for low cost end nodes to communicate with the rest of the network, specifically in situations where there is no meshing required. All in all, Green Power is a great addition to ZigBee 3.0.

ZigBee 3.0 is also fully IP compatible. ZigBee devices, just like WiFi devices, are usually connected to the internet via a router, gateway or set-top box, and as such can be immediately controllable by any other device that is connected to the internet, from PC, to tablet or smart phone app, and from any place in the world. Because ZigBee is fully WiFi and IP compatible, there is no need to have a ZigBee chip in the phone itself in order to find and control ZigBee connected Smart Home and IoT devices. It all happens through any web-connected hub (router, set-top box, gateway), which means that connected PC’s and smart phones (via WiFi or cellular) can function as dashboards, as they can find and communicate with any ZigBee devices without a problem.

ZigBee 3.0 is open, universal, and complete. It is fully interoperable with existing internet applications. It is supported by volume shipments today, with estimates ranging from 1M units per week to 1M units per day. There are probably already 500M ZigBee devices in the market. ZigBee 3.0 is the optimal solution for a wide range of Smart Home applications: lighting, security, thermostats, remote controls, etc. ZigBee 3.0 is secure, supports battery free devices, meshing, low latency and energy harvesting. It is unmatched and even unchallenged, even with Thread trying. For many application builders it is the one and onlywill be the low- power WiFi for many of our future IoT sense and control networks and applications. networking solution on top of the IEEE 802.15.4 radio technology. ZigBee 3.0