Where Is Wi-Fi Heading?

What Matters To Customers?

Of course, there are other considerations, like easy to connect and easy to install. There has been great progress on the first, and ease of installation is getting better with distributed Wi-Fi in a box (which also indirectly addresses the range issue). There is also the murkier issue of avoiding interference from neighbors, which may or may not contribute to a slow Wi-Fi issue.

While higher data rate may seem to be the most important issue, let’s first look at capacity – multiple users using Wi-Fi at the same time.

Most people today have a router, and everyone connecting to that router is using the same Wi-Fi channel. Which also means that those users are sharing the same bandwidth and the same raw data rate. When people are using a repeater, that bandwidth gets shared even more – you talk with your repeater on the same channel as your repeater talks with your router, effectively doubling the traffic on that same channel.

Here is where distributed Wi-Fi comes in and makes dramatic improvement. Every node on the network can talk on its own frequency band with the end user, while simultaneously communicating on other frequency bands with the main router connecting to the Internet.

To put this in perspective, consider that the first Wi-Fi effectively used 3 channels (in the 2.4 GHz band) to stay away from using the same channel as the neighbors. Today, “modern Wi-Fi” uses 40 MHz-wide channels and effectively supports 10 of those channels in the 2.4 GHz and the 5 GHz bands, making it not only easier to stay away from the neighbors, but also to optimize usage in a home by enabling different users using different channels and also allowing a wireless infrastructure in the home for distributed Wi-Fi with multiple access points.

Distributed Wi-Fi – Not As Simple As It Sounds

If talking about different channels in Wi-Fi makes it sound as simple as digital radio and changing channels with a push of a button, the reality is a little harsher. Cheap Wi-Fi radio technology causes easy bleeding from one channel into another, particularly when using high or maximum output power. This bleeding effectively kills the neighboring channels, drastically reducing overall capacity.

The real name of the game in Wi-Fi today is making sure that channels are well-separated, to stop the bleeding. Suddenly, building a Wi-Fi product is not only about the Wi-Fi chip. Now it’s also about the “front-ends” – the amplifiers and filters between the Wi-Fi chip and the antenna that make or break the capacity of the distributed Wi-Fi system.

So back to raw data rates. Our appetite for ever higher data rates seems insatiable. So, let’s take a look at where we came from and where are we going, as shown in the following table: 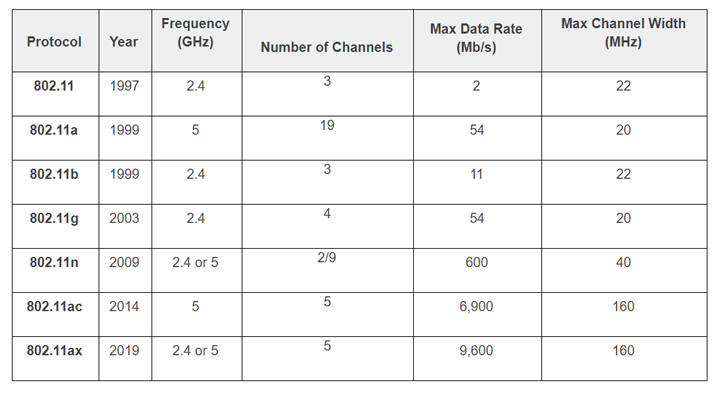 It’s important to note that this table focuses on raw data rate. But of course, we all know that in real life usage, there is often a significant difference between raw data rate and actual throughput, which can be half or even less of the raw data rate. In light of that, it’s good to know that while IEEE 802.11ax (planned for 2019) does include a modest increase in raw data rate, its main intention is to increase the actual throughput by a factor of 4 as compared to IEEE 802.11ac. This capacity improvement will result through splitting up MIMO communication streams and assigning them to different users for throughput optimization.

Another example of the race for more bandwidth is the 60 GHz family of IEEE 802.11 standards (originally under WiGig, but now back in the Wi-Fi Alliance). The first one (IEEE 802.11ad) has been available for several years but has not yet been widely adopted – and the next generation is already in the works, as shown here:

Unfortunately, there is a problem with 60 GHz – it cannot penetrate walls, and therefore it “stays” in the room.

But wait, is this really a problem? If it stays in the room, that means it does not interfere with the usage of the same channel/frequency in the other rooms, much less the neighbors. Sounds kind of ideal, doesn’t it? One may really wonder: if 60 GHz 8011.ad has existed for years, why hasn’t the market jumped on it yet?

The Internet, or the cloud, has very high-speed interconnects (100 Gb/s or more), comparable with large freeways. But the exit lane, the pipe to our home called the “local loop” (or the “small cell” in wireless lingo), is usually 100 Mb/s at best, although 1 Gb/s fiber and 10 Gb/s DOCSIS® 3.1 are starting to emerge. Then we have the option of a distributed Wi-Fi network in our house or building, for instance 802.11ac at 1 Gb/s or even a wired 10 Gb/s Ethernet cable. And finally, with the connection with the end node (the TV, game station, tablet, smart phone), we’re again at something like 1 Gb/s, although this could even be 7 Gb/s if we use IEEE 802.11d (WiGig). 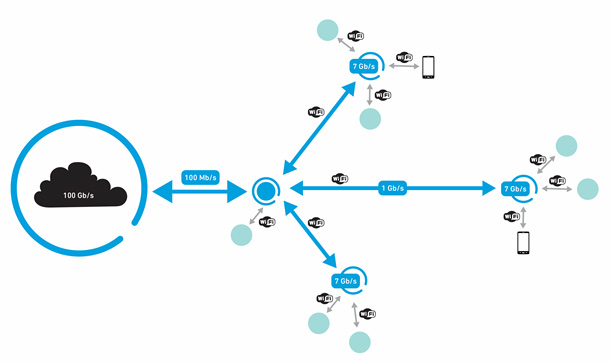 WiGig Doesn’t Help In This Scenario

It’s no surprise, then, that WiGig (IEEE 802.11ad) hasn’t really taken off yet. Why build a higher multi Gb/s highway in your room, if it connects via a 1 Gb/s pipe to a 100 Mb/s local loop, single lane road? It’s also no

surprise that in this context, the expectations for the tens of Gb/s (IEEE 802.11ay) should not be too high. Higher data rates to the end nodes are great, but if the infrastructure does not support it, then what’s the point?

So, the fact that the step from IEEE 802.11ac to IEEE 802.11ax is a very moderate step in terms of data rate, and a step more focused on higher capacity in the home (multiple users at the same time) makes a lot of sense. But the real hurdle is getting more data to (and from) the home.

To complicate matters further, there are effects to consider from streaming and bursting. There is another factor also, that makes this all even more convoluted. There is a difference between streaming and bursting. To stream a movie, you typically need a lot of continuing bandwidth for quite some time, say a continuous 20 Mb/s for high quality. That sounds quite doable with a 100 Mb/s pipe to your home. However, this 100 Mb/s has a somewhat statistical character. If everyone on the street is watching a movie, then the 100 Mb/s to your house quickly drops to significantly lower rates. Streaming a movie on a Saturday evening can be a challenging experience, as you are not the only one on the street (or in your small cell). It is no different than everyone in the house taking a shower at the same time, causing the pressure of the water system to drop.

Burst is another statistical effect. You can compare it to someone opening all the taps in the home to get as much water flowing as possible. If someone tries to download a movie as fast as possible (to watch it later, for example), it causes a real burst of data consumption as the system tries to get as close as possible to the 100 Mb/s to one house, instantaneously. For a short time, this should be no problem. But of course, it is not sustainable, as the rest of the neighborhood would degrade quickly. From a statistical perspective, the chance that everyone on the street would try to download a movie at the same time is probably not that high, but the fact that bursts have an effect on the available bandwidth is clear.

What Needs To Happen?

With all this in mind, let’s circle back to the problem of the disrupted hierarchy. What needs to be done to restore balance? Because until this problem is solved, it will be very hard to justify advancements on in-home data rates. So, let give this a closer look, because now the usage pattern in the home becomes relevant: how many people are living in the home, how many rooms (floors) does your home have, how many devices are used simultaneously per user, etc.

Let’s take an example of a family of four. Internet radio is playing in one room, mom is having a video conference in another room, dad is downloading a large report on his computer, the son is playing a video game and the daughter is watching YouTube on her phone while a movie streams on the TV. This family would be very happy with 1 Gb/s to the home, a 500 Mb/s distribution system in the home, and 100 Mb/s speed access from the end device to the access point, as shown below: 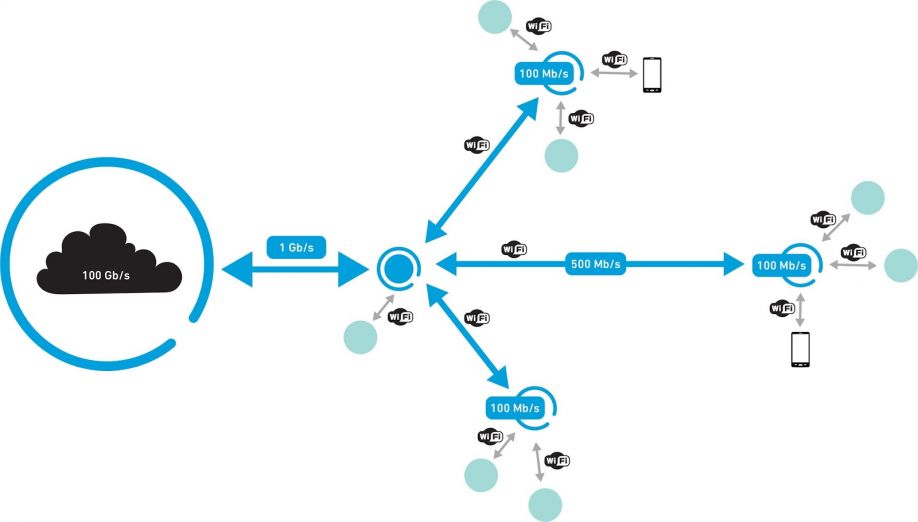 As we’ve discussed, it’s getting access to the home with 1 Gb/s that is the current challenge. Although the first rollout of 10 Gb/s DOCSIS 3.1 has started, most people are still working with 100 Mb/s or less. This means that at this moment there is clearly overcapacity with all the infrastructure inside the building and the end nodes raw data rates today exceeding 1 Gb/s.

Approaching This From The Other Side

We can also ask the reverse question: when does 7 Gb/s with 802.11ad in the phone or in a tablet start making sense? Well probably if the in-home infrastructure can handle 15-20 Gb/s and the access to the home is 30-50 Gb/s. Well… that probably is going to take a while, unfortunately….

Currently fiber to the home (FTTH) is advertised at 1 Gb/s for DOCSIS 3.0. The next-generation DOCSIS 3.1 FD (full duplex) promises 10 Gb/s (in 2020?), so – we are getting up there, but there are no plans yet beyond this. Also, for distributed Wi-Fi in the home the plans with IEEE 802.11ax are not reaching beyond the 4 Gb/s for in-building distribution – but as can be found in many installations in the home or in an office: 10-100 Gb/s Ethernet may come to the rescue if needed.

So, What Can We Realistically Expect?

In the near future, we probably have to settle with end nodes using 1 Gb/s IEEE 802.11ac, the home infrastructure will use 4 Gb/s IEEE 802.11ax, and probably with something like DOCSIS 3.1 FD at 10 Gb/s. This will give a balanced picture that can be the next stabilizing point for the industry for Internet access at home and in buildings. In this scenario, all the resources are effectively balanced and put in a proper hierarchy.

Interestingly, there is another solution for the broken hierarchy. But it would not be a simple one.

The concept of the solution goes something like this. Instead of doing everything “in the cloud,” this is about building a layer in between the cloud and the end-user. This layer, sometimes referred to as “edge computing,” is essentially a smart solution to pre-distribute information from the cloud to a local “super” edge-router with an integrated server.

Let’s look at an example. Someone interested in the news has a subscription that downloads all the news articles and video clips at 6 AM to her local router/server. She can browse during breakfast at 8 AM, going through the news and watching clips at incredibly high speeds and without delays. The bottleneck of getting information from the Internet has been removed. The router/server has become a traditional mailbox, in essence, and the news is kept up-to-date in her mailbox (router/server) all during the day.

From the other direction, “edge computing” is also helpful. Instead of sending a complete voice command, chat or conversation to the cloud for processing, the processing already takes place in the router, reducing the amount of data to be transmitted.

It is clear that such an architecture overhaul would be a tremendous undertaking, but it may nevertheless be a cheaper solution than rewiring all the exits from the high-speed Internet freeway. Certainly cheaper for the network providers, because in this situation the consumer will pick up the tab – either by paying for the more sophisticated edge-router and/or paying for the subscription for “edge routing” services.

What Does This All Mean?

There are several interesting consequences and conclusions to be drawn:

The best for Wi-Fi is yet to come, but it is important to look at the broader context to understand the relevance and the timing of all its new varieties.