When to Bring a Theater Designer on Board

The room’s size, ratios, layout, orientation, and construction play a huge role in the performance of the acoustics, the video and the overall experience the private theater provides. When the private theater designer is involved early on in a project, the designer has the ability to influence key decisions in the room’s design and construction. These decisions can be the difference between a “better than average” experience and one that is “awe inspiring”. Another valuable side effect of bringing the theater designer on board early in the process is cost savings. Having the theater designer involved early eliminates the need for any costly construction changes in the theater room to help salvage performance.

Two case studies are presented here to show just how important these early design decisions are to delivering a world class home theater experience, such as the one by DSI Entertainment Systems shown below. 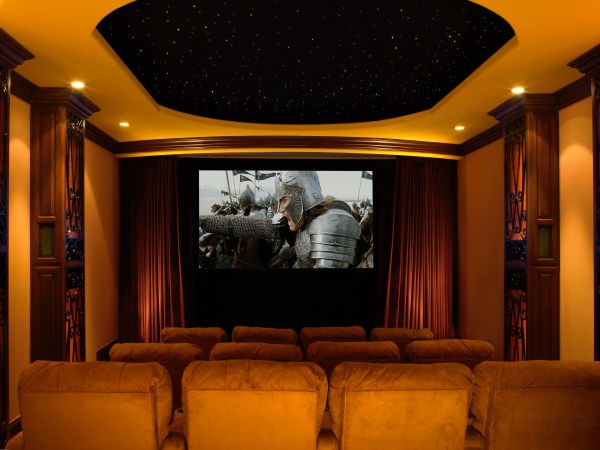 Paradise Theater was hired early in the design stages of a home’s future private theater and is asked by the homeowner to “work from a blank slate” and design the optimal room to comfortably seat 18.

This is the ideal scenario for a theater designer. On this particular project we were given the opportunity to specify the optimal room size to accommodate a specific number of seating positions. The ratio between the length and width of a room plays a particularly important role in that room’s performance, and having the opportunity to specify that ratio as a result of thorough analysis is a perfect situation. Unfortunately we are usually brought in too late to make these critical decisions.

Paradise Theater completed several rounds of acoustic and video analysis to determine an optimal room size to accommodate the 18 seating positions desired by the client. Once the room size was determined we used the results of our analysis to drive the room’s design including positioning speakers, projector, screen, acoustic devices and seating in optimal locations.

Uncompromising levels of performance and a private theater designed from the ground up, like a piece of performance machinery delivering a truly outstanding result. With the flexibility given to us, we were able to use the full range of our knowledge and capabilities to design every aspect of the room in order to deliver the world class performance our client expected.

Paradise Theater is hired after room is built and concrete slab floor is poured including two raised concrete platforms and steps. The platform locations were not ideal for maximizing the room’s performance. Some additional expenses were incurred by the client to compensate and salvage the room’s capability for high performance.

As a theater designer, we analyze each room for acoustic and video performance and use the results of the analysis to optimize seating positions in the room. This might result in moving a row of seats slightly forward, backward, side to side or coming up with a unique seating arrangement. The scenario with this particular room presented an issue due to the fixed position of the platforms in the room; it placed available seating at poor positions for audio and video performance. Typically we prefer to have a framed platform built within the room as it gives us maximum flexibility to position seating.

Not to worry – this is the job of a high performance theater designer – to analyze a space given its fixed conditions and make design decisions to optimize the performance within those parameters. Obviously, the more flexibility the designer has to influence the construction of the room, the more potential the room will have. Bringing a theater designer on board early in the process provides this flexibility and can avoid costly issues.

In the case of this particular room, Paradise Theater performed our comprehensive analysis process given the fixed condition of the room. We needed to determine a way to improve the performance potential for the room while respecting the client’s wishes for a specific seating configuration in their private theater. We determined that the builder could remove the poured concrete steps at the sides of the second row and extend that row’s platform a little further into the room. This placed the second row seating positions into more optimal locations in the room. We then, “raised” the floor in the front of the room by creating a false floor and converted the third row to a bar seating layout. This allowed for the correct positioning both acoustically and visually for all three rows and met the client’s objective for the number of seating positions in the room.

A private theater that delivers very high levels of audio/visual performance and the “amazing experience” our client was looking for. Although there were some additional expenses incurred for the construction modifications and slight compromises to the seating layout (third row theater seating converted to bar style seating), the private theater’s performance exceeded their expectations and they love their theater! Had Paradise Theater been hired prior to pouring of the concrete foundation we could have exceeded our client’s expectations without additional cost or compromise.