SSD And More Stuff than You Can Afford to Carry

“Have it reconfigure the shell metals. Use the gold titanium alloy from the seraphim tactical satellite. That should ensure a fuselage integrity while while maintaining power-to-weight ratio.” – “Iron Man,” Paramount, 2008

You know, where the impossible is so distorted that you honestly believe it’s possible.

For example, solid-state storage is absolutely replacing every other form of storage media … now!

As William Riva said, “All right, and that's what we're trying to do, but … honestly, it's impossible.”

Flash and solid-state storage is very good–fantastic even, but there are a few issues to overcome: 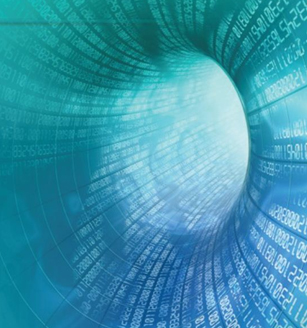 Content Growth – Every minute of the day, content is created on smartphones and tablets as well as systems around the globe and sent to businesses, individuals and social sites. The ever-increasing volume keeps the demand for storage humming.

Yes, that deafening sucking noise is content being created that needs to be stored somewhere if it is going to be used, accessed … somewhere, sometime!

Rhodey commented, “No, you see, this isn't a game.”

The Next Big Number – People used to think that a Terabyte was a big number, but that has quickly moved to Petabytes and beyond. Data doubles every two years and a single Gigabyte of stored data creates a Petabyte of shadow data. By 2015, we will be creating, replicating, storing nearly eight Zettabytes of data. Source – IDC

Agent Coulson looked at the numbers and said confidently, “This isn't my first rodeo, Mr. Stark.”

Yeah, we know their stuff is garbage (even in your business) and yours is really important; but still we’re talking a ton of storage that is needed at home, on the road, at the office.

We were satisfied without flash until we got our smartphone and then our iPad.

Suddenly we realized all of our devices should fire up and be ready the nanosecond we turned them on…BAM!!

Tony Stark saw the difference and commented, “Jarvis… sometimes you gotta run before you can walk.”

Yes, 32GB of flash in our phone and 64GB in our iPad made that speed possible.

But gawd, it’s got storage capacity to burn – 1TB.

Get a MacBook Air like our kids want us to get and half that capacity means dipping into their college funds.

For the extra storage of stuff, we’d get a 1TB personal cloud (you know, light, compact, bus-driven external HD) like OWC’s On-The-Go Pro.

We’ll connect to our home 8TB or office server and grab what we need.

If we have to, we’ll cautiously use the cloud.

But at FMS, Objective Analysis’ Jim Handy told us that a majority of the ultrabooks that ship this coming year will be with hybrid drives. 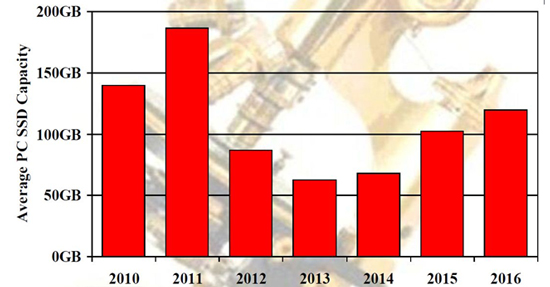 Ultrabook Flash – As portable system manufacturers moved to slimmer, lighter notebooks and now ultrabooks, the demand for PC SSD was initially high. Today, the average SSD capacity has dropped but is slowly rising again as people understand there is data that must be immediately available while other data can be accessed from external storage sources, including the cloud. Source – Objective Analysis

A hybrid HD, simply described as SSD on the front-end of a HD, will give you much better boot-up and access times.

That’s probably going to be a good bridge answer for lots of folks because we’ve never heard of anyone going up to a computer tech and say, “I’ve got too much storage capacity in my system. Would you put a smaller capacity drive in?”

But we just checked our notebook drive and after stripping out all of the bloatware – trials loaded on the drive to “help” you, we were only using 90GB of a 500GB drive.

It’s the sex-appeal products that are driving all the buzz for more flash, more SSD, you know smartphones, tablets, SSD for computers. 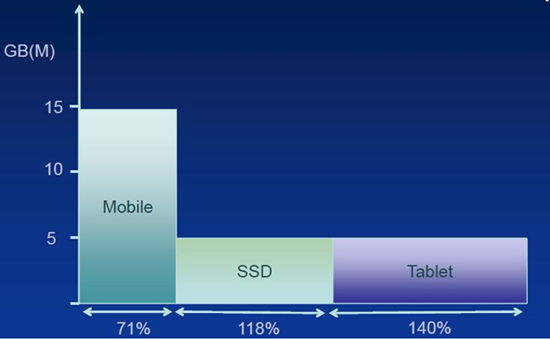 Solid Growth – Today’s mobile solutions – smartphones, tablets, notebooks/ultrabooks – have created a huge demand for semiconductor storage solutions. Even in emerging countries, people are moving from feature phones to smartphones where they are becoming their sole computing/communications solutions. Source – Gartner

It has also been a contributing factor for a huge noise market – the cloud. 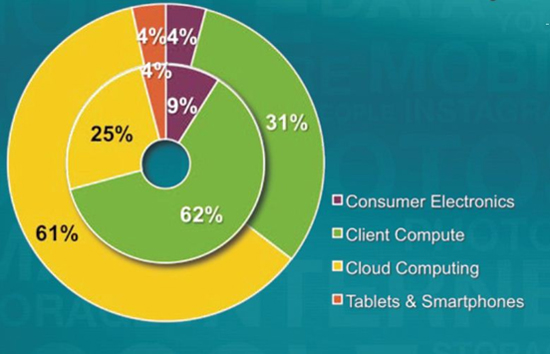 Storage Shift – While only about 25 percent of consumers use the cloud for storage today, the volume of content placed and available in the cloud will grow to 61 percent in the next two years. Private and public clouds and social media will drive the demand for storage of all types – including archiving – in the years ahead. Source – IDC

The cloud is a little like the magic mushroom and little blue pill of yesteryear.

Great vision, great feeling but eventually your stuff comes down to rest and it’s in someone’s huge storage server farm … not floating up there to admire, enjoy.

Of course, some idiot or malicious person can leave the backdoor open and bad guys/gals can come in and have their way with your data.

But the folks who offer the service are getting better with their security and we’re all getting a little less paranoid about our need for absolute security … face it, most people aren’t really interested in your Tweets and stuff.

The big news at FMS though was about all of the advances being made in enterprise SSD, because suddenly companies see there’s a profitable use of their data.

Business use (large and small) of SSD is growing in leaps and bounds because organizations are finding there is a lot of value in the big data (all your clicks, visits) they’ve been accumulating. 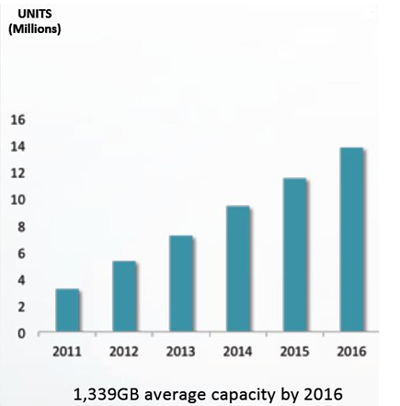 Performance, Price – Businesses will balance their need for rapid response times with the high cost of SSD (compared to HDs) and will prioritize applications and data with mission-critical applications edging up SSD unit requirements. Source – Gartner

Sure, the cost is still 10X that of HDs but businesses can see a solid return on their investment when they have a data environment that requires intensive random read/write and they need to boost performance and more efficiently manage and use their data.

Even our son, who swears we’re so middle ages for having hard drives on all of our current systems, uses a combination of SSD/HD for his not-for-profit (no it wasn’t planned that way) artistserver.com web site for indie musicians, music lovers.

Yeah, he’d love to use nothing but SSD; but even for him, there’s a cost that has to be considered. 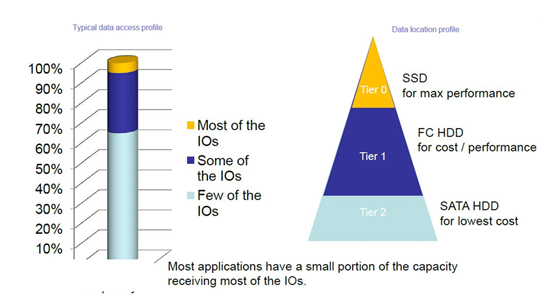 Enterprise Picture – Organizations will balance the storage device used with the volume of IOs needed for tasks. Those with heavy performance demands will reside on SSD, while those with fewer IOs will be move to higher-capacity, more economic HDs. Source – IDC

That’s why businesses – including cloud services – have to balance the cost, performance and ROI of their storage.

Oh yeah, there’s another part of the equation that has to be figured in … available product.

It costs about $6B for a single solid-state production line and takes two years to come online!

That’s not chump change, especially when HD folks keep pumping out bigger and bigger drives at lower and lower costs.

Race to Bottom – With each passing year, storage device manufacturers focus on improving production yields and increasing device capacity, while lowering the price to the end user. Despite steady improvements in all of these areas, memory storage devices continue to be 10X more expensive than hard drive storage. Source – Ed Grochowski


The “mature” HD industry now has three drive manufacturers left after the blood-letting (consolidation) and about 50 really good (yes, there are dogs/cats out there) packed solution providers.

Both technologies combined can’t meet our insatiable need for storage and even tape and optical are being used for storing the stuff you never use but just don’t want to throw away – archiving.

Flash for the “gotta have” consumer devices is a must because we just expect immediate response.

But there is a place for all the other storage devices because there are issues that have to be worked out.

Booming Business – Business demand for storage – by IT departments and cloud deployments – shows no sign of easing up. Enterprises are learning how to balance the performance and capacity requirements to ensure the most valuable applications can be quickly accessed from SSD, while less time intensive applications can reside on HDs. Source – Seagate


Solid-state is great, but as Tony Stark explained, “Clearly. With this laundry list of character defects, all the mistakes I've made, largely publicly.”

From our perspective, it’s nice to have a price/performance/capacity set of storage solutions available. 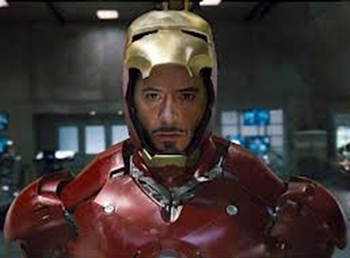 Pepper Potts looked at the SSD in the new ultrabook and said, “I thought it'd be bigger…”