Have any of you looked at your bank account lately?

Just curious, because we have no idea why half of the world seems to be hell-bent on getting us to take a giant leap into the mCommerce universe.

Some fortune tellers are really reaching when firms like Juniper Research says “OMG, how great it is. Just look 530M consumers will embrace mobile banking, up from 300M last year.”

That’s great, but there are seven billion + people on the planet and if Jupiter only classifies half of them as consumers, that means roughly 6.5B don’t embrace mobile banking.

Governmental and financial institutions are trying to convince consumers that mobile transactions are a good thing.

The Federal Reserve Board (Fed), which can’t seem to figure out how to fix the U.S. economy, says that mobile financial services will transform the American financial landscape.

Actually, they’ve done a pretty good job of that already.

The Fed uses a positive spin – one outta’ five people already use their mobile phones to access their bank account, credit card(s) and other financial services.

That also means four out of five said they’ll keep their money/credit cards and save their phones for Tweeting, catching up on the scores, watching The Big Bang Theory, Dallas or something equally educational.

No Bank, No Problem

A bunch of industry players are focusing on what they call the underbanked (prepaid credit cards but on the phone).

After years of bleeding red ink, they finally put the beast down.

But don’t think Nokia’s misery dampened the dreams of everyone else in the financial services industry.

That’s why everyone is in the game.

Every bank, credit/debit card company and financial institution has some form of play.

Tech industry players like Google, Microsoft, Sprint, Verizon and Apple have their solution(s) that are in the best interest of the merchant and consumer.

Square Options – Square has taken the two-pronged approach to handling mobile payments. They have a small card reader available for merchants to use in scanning your credit card (signing on the screen) for fast, convenient credit/debit card transactions. It’s very appealing to small businesses because there are no front-end costs and small transaction fee. Or, if you prefer, you can use their app on your phone and carry out a fast NFC (near field communication) transaction. Images – Square

Square is playing both sides of the street with a card reader for small merchants and a dedicated android, iOS app for consumers. Their newest partner, part-owner Starbucks, loves the app approach since they are the mobile payment success folks like to point to and say, “Yep, really works.”

By the end of the year, Square’s app will be accepted Starbuck’s 11,000 store fronts in addition to its present 75,000 merchants.

Square uses a bridging approach that could help both buyers and sellers cross Geoffrey Moore’s Chasm.

Want to leap across?

You’re probably already using your phone for banking and payments whenever possible.

BAM!! You’ll have an app that will be accepted almost everywhere, especially if you like lots of coffee.

Want to take your time until the bridge is built?

Use your card with their reader.

As you get more and more comfortable with seeing folks use the phone/card combo then you can slowly, painfully lose interest in your cards.

The scary part of the Square solution for consumers is that the business can have an app on one of their iPads and can “see” you have their app on your smartphone.

That will produce very selective marketing — slipping promos, coupons and whatever onto your phone, letting you know how special you are.

Of course, some folks will say, “Is that your smartphone or are you really glad to see me?”

In the future, you’ll probably wonder what money really was.

Ultimately, mobile wallets will gain wide acceptance. It’s just that the communications and financial industries have a lot of work to do to convince consumers to adopt and adapt.

African and Pacific Basin citizens have been fast to accept the convenience – they never trusted plastic in the first place – but people in the Americas and EU still like to feel their money.

According to a report early this year, about one-quarter of American consumers are interested in using some form of mobile wallet for purchases in stores.

No Thanks – The vast majority of people still aren’t interested in using mobile wallet applications and transactions because they see no real benefits and there are still too many obstacles. Source – Catapult

You know, like retailers/financial institutions using the Big Data to track your buying habits so they can determine/project what you might be interested in next.  There are also folks who are already learning how to perfect smartphone theft.

They look at your phone and repeat Charlie Blanchard’s statement to it, “You can tell me anything.”

An overwhelming 91 percent of the people surveyed worried about maintaining their privacy.

As for security, most people will probably continue the practice they’ve perfected with all of their devices … security is the IT’s, bank’s/financial institution’s, government’s problem, not yours or mine!

Then too, there’s the issue of how useful the technology is really going to be for ordinary people (not institutions). 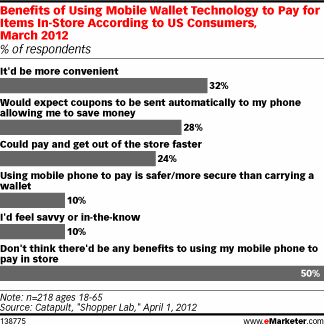 Oh Goodie – People who are interested in changing over to tomorrow’s mobile wallet feel it will be more convenient, will get them more coupons/free stuff and even get them out of the store faster. But they are still in the minority. Source – Catapult

About one-third of the people interviewed thought – for some reason – mobile wallets would be a more convenient way to pay.

Twenty-eight percent said they could have coupons sent right to their phone (there goes privacy) and 24 percent thought it was going to be faster to checkout.

However, more than half didn’t see the benefits of using a mobile wallet.

A really big deterrent for everyone is confusion.

There are too many mobile wallet, digital payment options out there right now and more coming every day.

The range of fees and consumer protection in the event of accidental or fraudulent charges is mysterious at best.

Most prepaid cards don’t offer any guaranteed protection. Even Visa and MasterCard have loophole guarantees.

Or, as Consumer Reports so eloquently put it, “getting relief or protection with a prepaid card can be like trying to cash in frequent flyer miles or credit card reward points–you don’t really learn what the rules and exclusions are until you try to use it.”

Paymaster – In many African and Asian countries, mobile phones have been readily accepted as a means of making micropayments for items and services. In the Americas and Europe, there are still major concerns about personal privacy and security, so adding another application to your smartphone will take awhile. Source – Unwired

Slowly, painfully though the world will turn to a mobile wallet solution because it’s fast, convenient and cheap for financial institutions and retailers.

After all, the only time you see a bank clerk today is when you go into their establishment and ask why the ATM (automatic teller machine) isn’t working because you can’t get any money.

If you’re already an ardent Starbucker; you can move more quickly, but be cautious:

As an analyst at Jupiter said, over time you’ll become comfortable with basic mobile banking functions and you’ll want to adopt all of the features and benefits of mobile transactions.

Well, the analyst actually called it the “all-immersive” consumer experience.

Just remember what Jane said when Dick asked her, “Do you mind if I kiss you in a public place?”

There will be a lot of people around when you whip out your phone.