Smart Appliances – Have they come of age?

Household chores have always been something to be avoided, but now smart appliances are making these chores easier if not more fun. Smart appliances stay connected to the Internet via a wi-fi connection and can be accessed and controlled remotely from any Internet accessible computer or mobile device.

Increasingly, home appliances, including televisions, VCRs, stereo equipment, refrigerators, washing machines, thermostats, light switches, and telephones have embedded computers. The more computerized appliances become with more features their user interfaces get harder to use, especially if the brands are different. At the same time, it is becoming common for people to carry a smart phone that has better input/output capabilities than the average home appliance. Smart phones come with the ability to communicate over the cellular networks, and most have built-in short range communication capabilities, such as Bluetooth, that could allow them to communicate with and control appliances in their surrounding environment.

When a user decides to control an appliance, the controller device (smartphone) downloads an App for that appliance and uses that App to automatically generate an interface for controlling that appliance. A two-way communication channel between the smartphone and the appliance allows the user’s commands to be sent to the appliance and feedback to be provided to the user.  Using smartphones as remote controls for appliances makes sense because these phones have better user interface hardware than most appliances and the ability to communicate.

The new smart appliances offer device-to-device connectivity and a home energy management system to allow for better energy efficiency. The smart appliances allow refrigerators and washing machines to be monitored from a smart TV or smartphone. 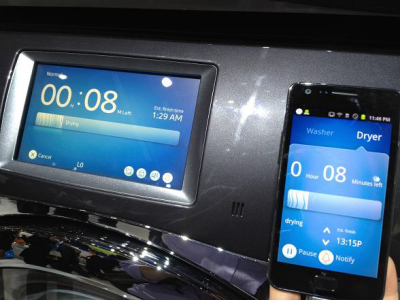 When is the last time your washing machine called you to tell you that the wash was ready for the dryer? Now, you can dump your laundry in the washer and head off to do some gardening. Instead of having to run back to check to see if it's time to put the clothes in the dryer, you get an alert on your cell phone. You can also load the washer and call it from your cell phone at a later time to start the wash cycle so that the wash will finish as you drive into the garage. Whirlpool has an app that will also let you know if there are any problems with the washing machine or dryer, and help set up a repair appointment.

Samsung’s RF4289 LCD refrigerator is designed to be the first refrigerator with kitchen-relevant apps on a WiFi-enabled 8-inch LCD touch screen, which is a smart tablet built right into the refrigerator. Everything that you can access from your own tablet and or computer, you can do on the LCD touch screen, from checking your Twitter account, to seeing what the weather is going to be like for the day. You can also access recipe collections on Epicurious, leave notes for the family, review the family’s Google Calendar, listen to streaming music via Pandora, and even run a photo slide show via Picasa. 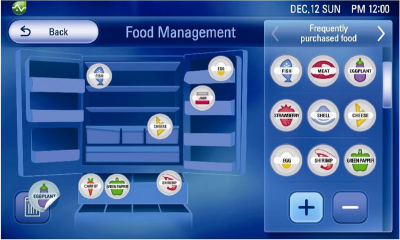 LG’s ThinQ technology has a Smart Manager system for their refrigerator.  As you place food in the fridge, you can read the bar code with your smartphone, and the system will store the information. The system will inform you when your food is about to expire. If you have someone with a medical problem, you can enter the problem, such as diabetes, and the system will post suggested recipes. The refrigerator has a Smart Shopping App which lets you refer to your grocery list from your fridge on your phone so that you don’t duplicate an item that you already have.  When you select a recipe it is sent directly from the smart fridge to the smart oven allowing the oven to pre-heat and prepare itself for the meal ahead. 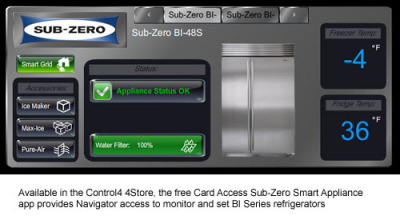 The Card Access Smart Appliance Module combines Sub-Zero BI-Series refrigerators’ advanced technologies with the capabilities of Control4 providing a comprehensive food preservation system, which monitors the refrigerator door/freezer door open and close status, and if a door remains open longer than 5 minutes, it will send you an email notification. The module will check refrigerator and freezer temperature set points, water filter useful life, and vacation modes, all of which can be monitored via your smartphone or tablet.

Who likes to vacuum the house; raise your hands? I don’t see any hands. Well, with iRobot’s Roomba you can forget vacuuming. Their model 780 can be scheduled to clean up to 7 times a week, and it can go from one room to the next when finished with a room. There is a device that keeps the Roomba in a room until it is finished before allowing it to enter an adjoining room. It even senses dirt and debris. 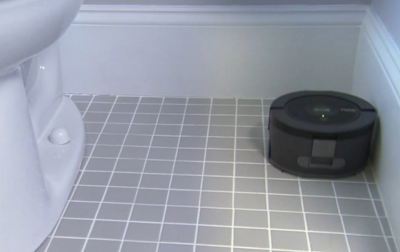 To go along with the 780 is the Scooba 230, which is the tiny disc that you see behind the toilet. The 230 is 3.5 inches tall and 6.5 inches in diameter, and it is a terrific cleaner for places you don’t want to clean. For example, it is able to squeeze between the toilet and the wall, and it is able to mop around chair legs as well. It can be filled with water right from the faucet, and it keeps dirty water and cleaning solution separate for washing, scrubbing, and squeegee jobs.

Unlike Roomba, the LG HOM BOT cleans by mapping out the room with ultrasonic and infrared sensors as well as a dual-camera system. One camera points at the ceiling and detects corners to navigate. The other points at the ground and identifies obstacles. The machine can also remember whether a piece of furniture has been removed from or added to the room. It also knows whether obstacles are moving, such as your pets or stationary and the HOM BOT will react accordingly.

Hom-Bot is a Wi-Fi networked device, so you can use its video cameras to monitor your home while you're away. Should you need to spice up the house before you arrive home, you can tell it to start cleaning. It also has spot and automatic cleaning modes that can be activated at the push of a button.

Coffee lovers will appreciate the Philips Saeco Xelsis Digital ID coffee maker, which makes coffee as easy as touching a fingerprint scanner that memorizes the owner’s preferences, such as strength and amount of froth, for up to six people and automatically brews one cup at a time. So with one quick touch, anyone can make the coffee to their taste. It will even moisturize your coffee beans before grinding in order to extract their full flavor. If you need to ask the price, you probably can’t afford it.

Your next hot water heater may be among a number of smart appliances in your home that will talk to you and exchange information about your vacation plans or guest schedules. Your next water heater should be efficient, and smart.

An Energy Star electric hybrid water heater is designed to absorb heat from the ambient air, and transfer it into stored water to a desired temperature for homes or commercial heating.

Haier, a leading Chinese consumer electronics company, is introducing “cloud living” solutions, which truly puts the TV at the centre of the “cloud home.” For many years, the role of the TV has evolved, with it moving from being an entertainment terminal to a connected platform that delivers a wide range of services. The latest Haier TVs take that progress a step further, delivering a “cloud living” TV that acts as a hub, receiving and transmitting information directly to and from other terminals such as cell phones, computers and PDAs. Furthermore, TVs equipped with cloud technology will be able to act as a remote to control washing machines, PCs, and other appliances in the home.

The efforts to make the kitchen smart are just beginning, and in time, the appliances will get better and cheaper. I believe we will see a surge in smart appliances when the construction industry makes a comeback and these appliances become part of a new home.

My problem with smart appliances is that I will have to get my grandkids to operate them. Now, what button do I push?