Since 2006, the Montréal–Pierre Elliott Trudeau International Airport, the busiest airport in Quebec, Canada, has been in the process of updating and modernizing its facilities and terminals. With the expansion of the international terminal and the addition of new restaurants, shops, and a dutyfree area, the airport was looking to further enhance the space with visual elements that were both eye catching and informational. 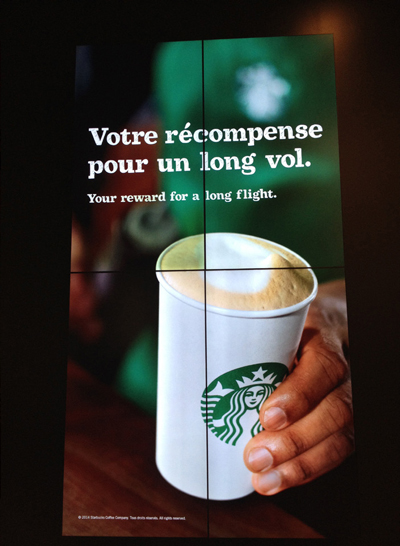 As a new section of the airport, it was imperative for the Montréal–Trudeau to provide wayfinding signage to travelers. With flights departing to and arriving from South America and Europe, the facility also needed a way to keep travelers up-to-date on flight information and delays at customs and the security check.

Based on the new addition, the airport had a clean palette to design. The end result would have to be something large and accessible, yet spatially logical for busy areas. After consulting with its designers, the airport chose to move forward with the installation of various digital signage displays and video walls throughout the terminal.

In mid-November 2013, with the decision of digital signage displays and video walls in place, the Montréal–Trudeau turned to visual communications experts, Four Winds Interactive, and a team of integrators that they regularly worked with, Cablage Expert, to discuss logistics. Understanding the needs for this project, Cablage Expert recommended Peerless-AV® to provide the display and video wall mounts. While the Montréal–Trudeau had not previously worked with Peerless-AV®, Cablage Expert praised the serviceability of Peerless-AV® mounts, making them ideal for this project. 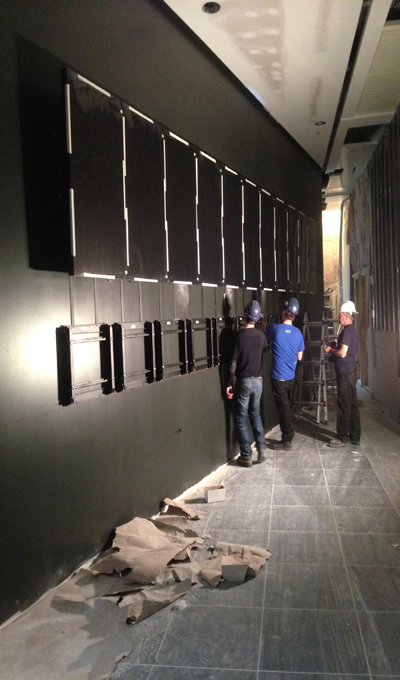 To seamlessly install multiple video displays, Cablage Expert relied on the tool-less adjustability of the mounts – a top feature for the team. After installation was complete, the team was also able to quickly access the back of the displays and service the mounts. 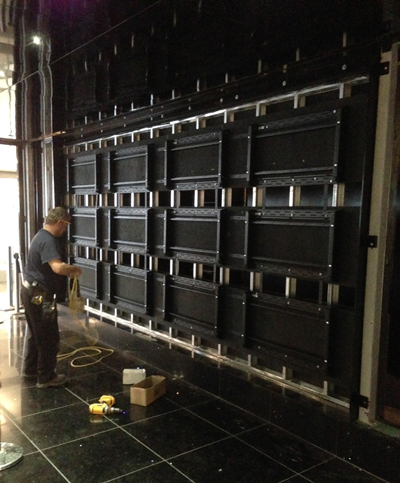 Located in the general admission area of the Montréal– Trudeau, the 11×2 video wall of 55” displays provides travelers with information on arriving and departing flights as well as details on delays at the security checkpoint at customs. The 2×2 video wall, which is also located in the general admission area, near the food court, shares a map of the airport. The 75” tripod of displays offers travelers an interactive wayfinding tool.

The Peerless-AV® Full Service Video Wall Mounts enabled the team at Cablage Expert to seamlessly blend displays straight with the wall in high traffic areas. “One of the main reasons we enjoy working with Peerless-AV® is the ease in serviceability for all of their mounts,” said Eric Gariepy, Vice President of Operations, Cablage Expert. “We have worked with other vendors, but the accessibility we are provided in using Peerless-AV® mounts cannot be beat.”

In place for over a year, the Montréal–Pierre Elliott Trudeau International Airport is very pleased with the results of its new digital signage and video wall displays. According to the airport director, when the signage lights up at night, your attention goes directly to the screen – it’s eye catching. With the success of the project, the Montréal–Trudeau plans to use the digital signage for advertising. They are also considering the installation of additional video walls and tripods.

Peerless-AV, a Peerless Industries, Inc. company, is a leading designer, manufacturer and distributor of audiovisual solutions. From its award-winning mounts and wireless audio systems to indoor/outdoor kiosks and the industry’s first fully sealed outdoor displays, Peerless-AV aims to Get it Right by fulfilling both integrators’ needs for ease of installation and service, and end-users’ dreams in residential and commercial applications.