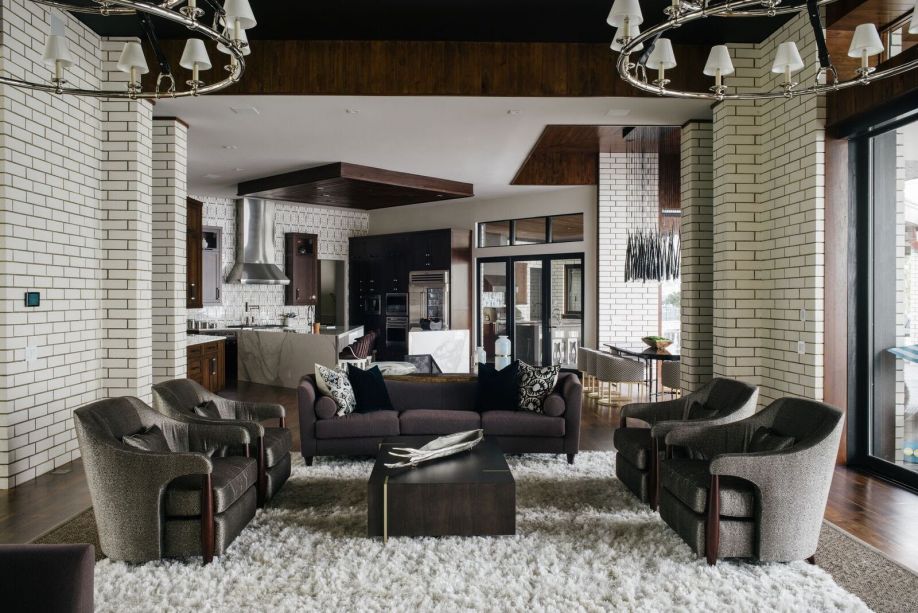 During the home’s building process in late 2016, Hamlin wanted to incorporate one central interface to control all his home’s sub-systems and sophisticated entertainment technology. After a recommendation from Thompson Custom Home Builder, he called on local technology integration firm Interactive Interiors to design a fast and reliable automation system to meet his many objectives. “Denny Hamlin is familiar with control because he had used a different system in a past home, but wasn’t happy with the complexity of the interface and the issues that kept arising,” Brian Berg, President of Interactive Interiors said. “He asked me to install the most reliable and easiest to use system on the market, and I confidently suggested ELAN.”

The Interactive Interiors team built the residence’s entire smart home infrastructure on an ELAN Entertainment & Control System. The installed system included two ELAN gSC10 controllers, four ELAN g1 controllers, two ELAN S1616A Multi-Zone Audio Controllers, and one ELAN gMV1616 UltraMatrix Switcher, accessible via 12 ELAN 7” touch panels and 16 ELAN remotes. Hamlin also installed the ELAN app on his smartphone for remote use while on the road. He can now control the home’s lighting, 32 zones of audio, video, and security, from anywhere at any time.

“Interactive interiors did a phenomenal job to quickly and efficiently install ELAN into the home,” said Ted Thompson, President of Thompson Custom Home Builder. “Sometimes, programmers work for months on end when implementing a smart home infrastructure of this size and magnitude. But the installation process and the system configuration was totally seamless.”

With ELAN at the helm, the Interactive Interiors team designed an extensive entertainment system on a whole-home Ubiquiti wireless network for Hamlin to enjoy during his time off the racetrack. Throughout the spacious residence, they installed 24 Samsung 60” televisions, both indoors and outdoors, as well as a Samsung 88” curved screen TV in the home’s central media room.

They also built and designed a central home theater, complete with a 110” matte white projection screen with a black velvet frame, and an accompanying Sony SXRD Projector equipped with 4K Ultra HD resolution at a 16:9 ratio. “We worked closely with the custom cabinet builder to create 55” panels surrounding the theater screen so that Hamlin can watch five independent channels at the same time, which is ideal for enjoying different races or games simultaneously,” Berg said. “Together, we also designed a custom wood frame around the screen with embedded Lutron lighting, all of which is automated through the ELAN system.”

Incorporating custom design elements with the home’s technology was common throughout the installation process. Interactive Interiors worked closely with interior designer Scott Carpenter to integrate unique accents to shield or show technology on a case-by-case basis.

“Denny wanted the overall design aesthetic to be clean, simple and contemporary,” Carpenter explained. “In addition to the unique architectural and design elements we incorporated, we also played with technology to achieve our goal. We installed custom-built LED lighting strips across many of the home’s moldings, especially for the home’s art gallery wall.”

According to Carpenter, technology absolutely impacts design and it is therefore important to use it in a way that enhances – rather than inhibits – creativity. “All of the home’s components need to fit together like a puzzle,” he said. “We really were able to use the technology, and the instant and automatic control, to accentuate particular elements that we wanted to emphasize.”

Hamlin also wanted a reliable and extensive security system to protect his family and his property while on the road. Interactive Interiors integrated a Holovision doorbell, intercom and camera at the front door into the ELAN system, enabling Hamlin to check in on the front door from anywhere in the home, or the world. A whole-home indoor and outdoor GE security system was integrated into the system for maximum protection.

Thus far, Hamlin is thrilled with his new smart home and hasn’t experienced any of the previous problems he had with automation. “Denny really wanted to be able to control all of the home’s elements without fuss or complication,” Thompson said. “I would absolutely recommend that builders, integrators and homeowners use ELAN when they are looking for seamless control.”

“ELAN ties all of my home’s components together and makes them accessible from anywhere in the world,” Hamlin said. “I couldn’t be happier with how the system turned out.”

About ELAN
ELAN, from Core Brands, develops an award-winning line of whole-house entertainment and control solutions distributed through a comprehensive channel of select dealers throughout the United States, Canada, and countries worldwide. The new ELAN 8 update was honored with the “2017 Human Interface Product of the Year” award from the Consumer Technology Association’s Mark of Excellence Award Program Committee at CES 2017. To learn more, visit www.elanhomesystems.com.