Driving Bits: The More Connected the Car, the More Disconnected You’ll Be

“That driving backwards. It's creeping me out. You're gonna wreck or something.” – Lightning McQueen, “Cars,” Disney, 2006

Having grown up in the flat heartland of the country, I feel sorry for my son.

Back then, a car wasn’t simply transportation; it was an expression of who you were.

Bore out the cylinders and put in oversized pistons, add a couple of supercharged four-barrel carbs,  rework the shifting and drive train, chop the coils, add oversized tires, customize the exterior, have the interior pleated/rolled, add some dynamite flames on the side and it was a road-eating, date magnet machine.

Today, auto manufacturers offer you a computer on wheels.

And if they and the computer/communications industries have their way, it’s only going to get better (or worse, depending on your point of view).

Their ultimate goal is to take the driver out of the entire equation so you’re just along for the ride.

On second thought, that might be necessary because a recent study by the University of Michigan reports that more people of all age groups are forgoing the priviledge of having a driver’s license.  The biggest shift in recent years has been in the 16-year-olds and 20-to-24-year-olds — with each group falling three percent to 24.5 percent and 76.7 percent, respectively.

No one has tried to figure out why, but maybe it’s because all those companies are trying to take the thrill/challenge out of driving. Or, they want to control/monitor the car and you even though they quietly admit there are a helluva’ lot of software/security issues.

It doesn’t seem to bother the auto, computer and communications industries because they’re plunging ahead to make certain the internet-connected car is your only choice … if you decide you want something more than public transportation. 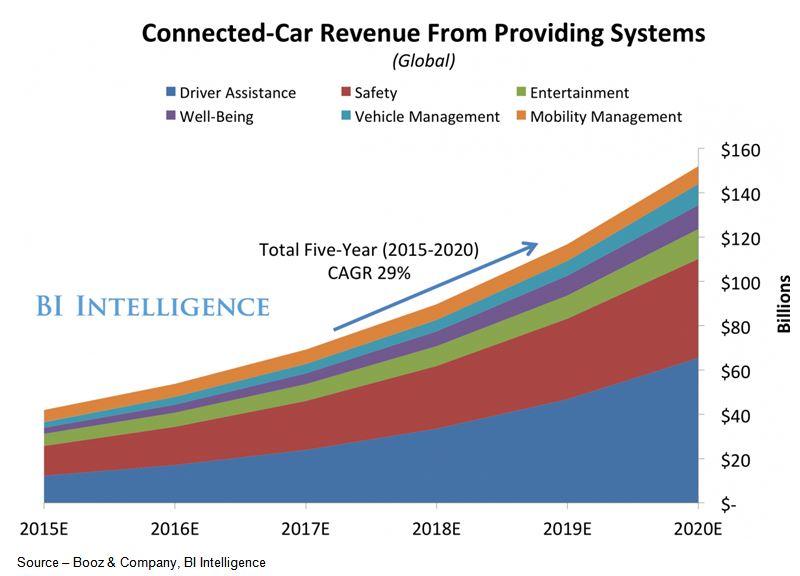 Money Maker – The growth of the connected car arena is opening the doors for more and more companies to sell products and services to tomorrow’s driving consumer.

With Tesla gaining a hero-worship following from governmental agencies and consumers for its high-perofrmance, zero-emissions vehicles, all of the players are determined to get their piece of the action.

Within five years, the GSMA (Groupe Speciale Mobile Association) estimates that 250M connected cars (25 percent of the one billion cars produced) will be sold and 58 percent will have some sort of Internet connection.

By 2018, car-focused telecom, hardware and software services will be a $51B market.

While Google and most of the car manufacturers are busy designing and testing the autonomous car of the future, everyone is working on ideas that will ease you into tomorrow.

Apple is busy investing in its poorly kept secret auto unveil by adding new features to its iOS 7 platform that will put iOS in the car, starting with the infotainment system.

To tap into the best technology possible, every transportation and computer/communications firm is setting up major R&D (research and development) operations in Silicon Valley and other major tech centers. 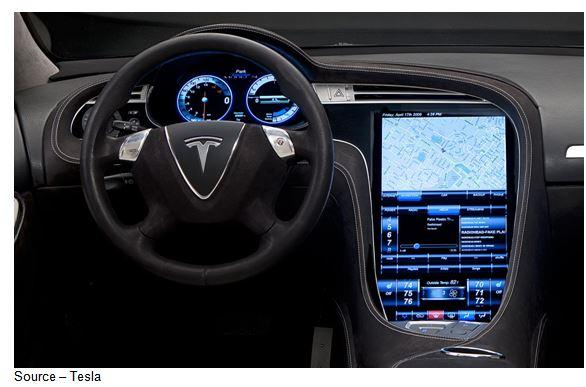 Real Infotainment – Designed from the inside out and top down, the Tesla Model S has a comprehensive infotainment system that will make any tech whiz want to stay in his/her car for days.  The vehicle’s brain monitors literally everything in and around the car.  Software and apps can be offered and delivered over the air and updates can be made automatically while you sleep.

They’ve started with the infotainment center first because it’s the center of the action for you and the car.

It’s sorta’,  kinda’ an extension of your smartphone; which already has more apps than you really use. It’s also the first place you turn when you want news, information and entertainment.

Adding all of that computer power and control in the car’s dashboard is not only pretty easy to do, it also gives them a centralized embedded computer that can be used to monitor, control the car’s systems and provide connectivity for you and others.

Depending on the company, they figure it’s an easy way to add mobile apps and Internet-based services you already use in the car to keep you informed and entertained while they gather data.

Insurance companies can’t wait to get their hands on information about where you drive and how you drive.

Of course, it’s all about how they’ll use that information to offer you better services and tailor their offerings to you.

Innocent Dongle – With the promise of lower insurance payments, millions of consumers added the Progressive Snapshot to their car.  In addition to giving detailed information on the driver and his/her driving habits it also provided a wide open door for anyone to hack into the vehicle to obtain information for their own use or introduce malware that could affect the entire car.

Progressive Insurance liked the idea of rewarding good drivers so much that they offered policy holders their sexy Snapshot that could be plugged into your car’s OBDII (on-board diagnostic system) port.

More than two million folks bought into the idea of letting the company track their driving habits so they could get a lower insurance rate based on the information the dongle sent to Progressive’s servers.

While that makes about as much sense as the tax folks knocking on your door and saying “Hi I’m from the IRS and here to help you,” Progressive forgot something in their rush to monitor their policy holders.

It turns out the device and service are about as secure as that Hello Barbie you bought your daughter for Christmas.

Since Progressive didn’t hire the sharpest – or most diligent/expensive – programmers around, they didn’t bother with any needless overhead like security or encryption.

Or as Dale Peterson, head of Digital Bond Labs, said, "It's insecure by design."

That means the Progressive Snapshot-using, conscientious policyholder is driving around with something that is wide open to every bug folks want to release .

Oh yeah, the OBDII port connects to the car’s CAN (controller area network) bus which controls …. everything!

Okay, so the auto and compter hardware/software, communications companies aren’t quite that cavalier about their monitoring and information gathering.

But note, even though the FBI (Federal Bureau of Investigation) can’t get past the encryption on an iPhone (or most anyone else’s for that matter); they and the National Highway Traffic Safety Administration did report that the rising use of car computers did pose a rising risk to cyberattacks.

Last year, Wired magazine took control of a Jeep Cherokee and put it in a ditch, and this was followed by Fiat Chrysler recalling 1.4M “vulnerable” vehicles. Then someone hacked GM’s OnStar service and someone else hacked the Nissan Leaf.

Meanwhile, all of the companies involved in designing, developing your connected car and ultimately your autonomous vehicle say they’re working diligently to deliver advanced networking capabilities with the best and most foolproof solutions possible. 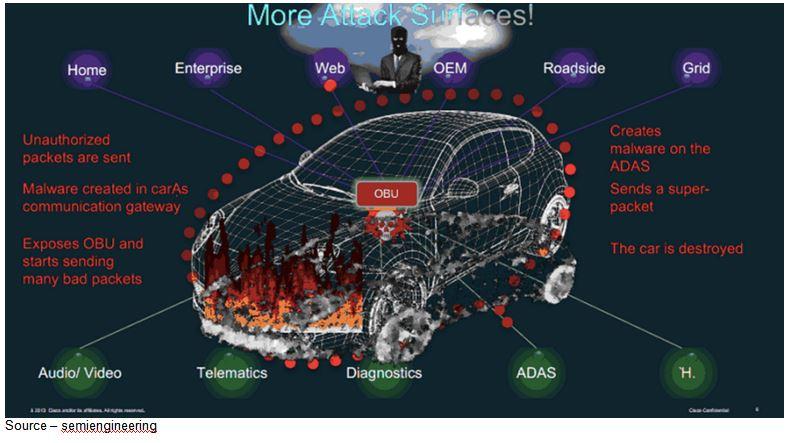 Attack Points – With more and more computerized sensors and applications used in today’s vehicle designs, the potential for system malfunctions or cyber attack continue to rise.  Responsible designers and developers continually test and update hardware/software but it’s difficult to keep up with, much less anticipate, today’s cyber criminals and hackers

All the vehicle owner has to do is ensure his/her software licenses are current and the constant stream of updates and patches are installed and active.

The challenge is that there are a lot of companies/products involved in delivering the connected car and that means a major concern regarding safety and data privacy.

Even if they don’t put you into a tree, they can remotely grab information from your car or access all the information they want from the manufacturer’s/service provider’s cloud.

While all that connectivity bothers some folks, the majority of consumers who bother to get a driver’s license have bought into the industry’s vision of millions of cars driving them around.

Or even owning a car for that matter.  Instead more folks are beginning to think of transportation as just another service using Zipcar, Uber, Google, Apple, Enterprise, Hertz, whoever to get around.

Of course, Ford is still planning on you really wanting a driverless car.

Not the Same – While Ford thinks the drivin’ theater can be as much fun as yesterday’s drive-in, most people wouldn't agree.  The drive-in was a whole lot more than an entertaining movie … a whole lot more!

To help you fill the average of 1.2 hours you spend traveling between locations and 38 hours a year stuck in traffic, Ford has patented the drivein’ theater.

Somehow, I just don’t see the theater on wheels ever equaling the greatest making out place man ever invented which, unfortunately, has all but disappeared from the landscape.

Of course, you’re welcome to your opinion. But whether it’s simply a connected or autonomous car, the combined industries are determined to take all of the fun and excitement out of driving and parking.

Might as well stay home, order a pizza on your iPhone and watch Netflix. 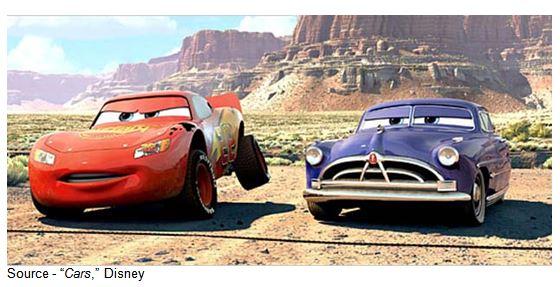 Skipping the car all together will enable people to agree with Doc Hudson, “These are good folk around here, who care about one another. I don't want 'em depending on someone they can't count on.