Digital Signage â€“ They Tell, Sell, See, Will Do More

There are two aspects of the digital signage industry – what it is today (pretty darn rosy) and what it will be in just a few years (mind boggling).

To most folks, digital signage is all of those gawdy signs they see in NYC’s Times Square (above), Vegas or the static and video signs you see in stores. But for people in the industry, DSE (Digital Signage Expo) is the event to learn about the latest in signage components, solutions, how to make money and what tomorrow has in store for them.

This year’s show in Vegas showed there are even newer, better, more profitable ways for the signage people to do to printed signs and billboards with what TV, tablet, smartphone technology has done to music, reading, entertainment.

And they have even bigger plans for making digital signage more indispensible, more helpful to us as they look forward to double-digit growth in the market for the foreseeable future.

Of course, that kind of growth is possible because we’ve helped them commoditize their key products – screens, network connectivity, apps and the cloud.

Regardless of the show, Samsung seems hell-bent on working hard to overwhelm everyone:

The show is usually broken down into three main categories – displays, content management software and media players. But Samsung seems determined to dominate digital signage by offering a bundled solution to integrators and their customers that embeds the media player into the display.

Then they threw in their Smart Storage Platform software just to sweeten the pot for a lot of software developers, content providers and customers – businesses and institutions.

Sure, folks at Walmart, Target, Flixio, OSM Solutions and other integrators and content developers/providers looked closely at what the Samsung package could do and said, “That don’t impress me much.”

But there are a lot of low hanging signage opportunities that will find the Samsung package pretty appealing.

Embedded media players seem pretty logical and probably not too expensive to include, since most LCD TVs are also including them for people who use their sets to go online for content and communications at home.

However, those are pretty simple tasks and the best installations use a PC or open system media player to handle things like multi-zone and multiple time/message changes.

The folks who keep telling us all of the content we produce/consume were out in force this year with their new digital media player and obviously, telling everyone how their network hardware and tools will keep the educational, informational and selling content flowing.

Theirs isn’t the least expensive media player, but they sure have the networking credibility. 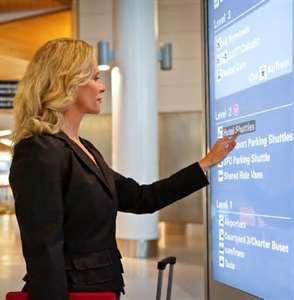 The Cisco media player looks about like one of the company’s hubs but allows user to stream all kinds of content and, with the right digital sign and the right software, it provides very responsive touch control and even smooth hand control without touching the screen.

Proving that Intel is more than a computer chip company – lots more – the company showed off a wide range of solutions at DSE for digital signage, interactive kiosks, automated retailing, multi-sensory solutions and more.

We particularly like their virtual shopping concepts that can give you a firsthand look at things even before you hold them in your hands or try them on.

The leading-edge work they (and others) do give integrators and content developers/distributors an idea of what is possible, not just today, but tomorrow.

It’s the OMG stuff we see/hear about when we attend Display Search’s Emerging Display events.

That’s probably why DSE is attracting a bigger crowd year after year.

The exhibitors and attendees have already taken the next step in interactive signage where the sign can “see” the person, determine his/her age and gender. By tapping into Big Data determine if the person has been in the store before, what he/she bought and deliver the ads best suited to the visitor.

The idea is great and will be out there soon; but Bob O’Donnell, of IDC, notes that to take full advantage of AR (augmented reality) and personalized content presentation, we’ll walk the fine line of privacy and at some point it will have to be addressed … by someone.

Obviously, Qualcomm is also doing some serious work in this arena to bring together mobile devices, digital signage and Big Data.

Why bother with touching the screens when you can interact with them with gestures and eye movement as well as your mobile device to get exactly the information/content you want immediately?

Corning’s Gorilla Glass (the stuff that is used in the better smartphones, tablets) is gaining a lot of acceptance in the digital signage community. Of course, their YouTube videos – A Day of Made of Glass 1, 2 – have made industry folks’ imaginations run wild.

Then there’s also the bendable and flexible glass that makes us all realize we haven’t even scratched the surface yet.

The glass being used in the not-yet-announced iWatch is a move in that direction, but just think what displays will look like when they’re on the floor and bend around corners … awesome!

Making that flexible glass economical is still about three years away, but the media creation, delivery, and distribution folks and integrators are already planning ahead because those years will pass in the blink of an eye.

Retailers, institutions, organizations and advertising people see great opportunities now and in the future to educate, inform and sell to you using content management and network software that will schedule, realign and deliver media and ads you really want to stop and view.

Right now, they’re still dealing with what I will call conventional displays and you can expect to see more deployed in the years ahead.

LCD (liquid crystal display) signs still dominate the market, while LED (light emitting diode)displays are beginning to show a lot of potential as is the slowly emerging OLED (organic LED.

The screen is the thing you see and they’re coming in an amazing array of sizes and applications such as small ones for badges, in gas station pumps, kiosks, stand-alone digital signs, retail windows/showcases, bar/restaurant/bathroom networks and more.

The in-screen and specialty media player as well as the content development, management, distribution software combine to make it all run smoothly and deliver the messages to us in a way that yesterday’s printed signs never could.

It’s making it a lot easier for almost any organization to have their own network to deliver customized content.