“What's important about them is whether they're good or bad, and these children are bad.” – Alan Bernard, “Village of the Damned,” MGM, 1960

Devices and social media that connect children and their families have become an integral part of our daily lives.

Most of the time, it is valuable, not just for staying in touch but building/strengthening the relationship and yes, in keeping them entertained.

Even before they can talk, children are comfortable with smartphones/tablets/almost any screen, often instinctually swiping their fingers across screens.

According to Harris Interactive, two-thirds of adults use mobile devices to entertain children five-years-old and younger.

While there are those who are certain the mobile device is a decided move forward in educating youngsters, there is another camp that states the flat screen doesn’t provide the retention/recall that books and physical play provide.

While it will take years to determine which group is right, there is no question that mobile has become the standard for most youngsters. 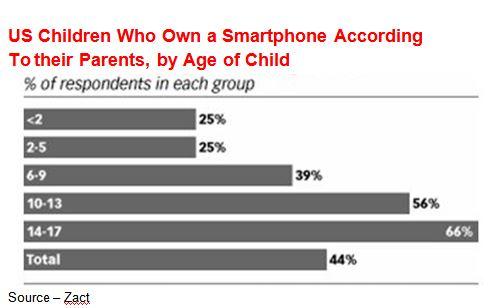 Early Connectors – Getting a smartphone or tablet isn’t the same as a rite of passage such as when you turn 16 and get a driver’s license.  Increasingly, the devices are used as a way to distract/occupy the little ones, enable parents to have a way of adding to youngster’s protection; and for preteens and teens, to feel connected with the world around them.

According to an eMarketer study, nearly seven out of 10 parents owned a smartphone, 4 percent had a tablet and 21 percent ereaders. In addition, they indicated they carried out more mobile content activity than nonparents including email, game play, social media and viewing videos.

But even though youngsters are on smartphones—and for significant amounts of time— parents weren’t comfortable with the fact until their child was older, in their late teens.

The youngsters, on the other hand–especially teens, felt it was important to go online to chat with friends, spend idle time and follow the latest trends. 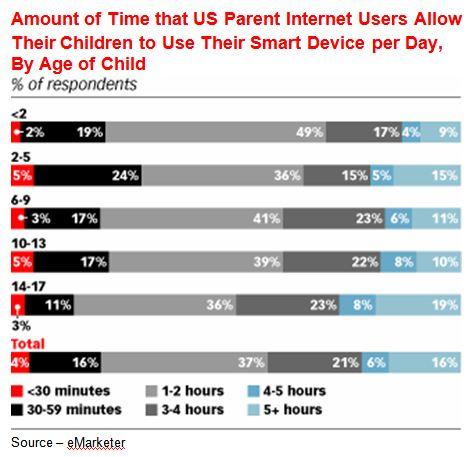 Matter of Balance – Parents may provide their children with smart devices, but the majority place restrictions on the amount of time they can be used in a day and monitor/supervise/block certain online activity.

While the children had their own devices, 37 percent of the parents limited their screen time to one-two hours a day and 21 percent let them keep the device with them three-four hours a day. Sixteen percent didn’t place any limits on their usage.

Younger online social media/mobile device users have moved away from Facebook to other sites such as Snapchat, which boasts 100 million users.

While the company said the disclosure of more than 200,000 photos wasn’t their fault, few young members really believed the company’s claim that the images would expire and disappear a few seconds after being viewed.

Governments and parents have been increasingly concerned that the “free” social media platforms and that advertisers/marketers could overstep the boundaries of privacy to collect, share and sell the digital information of anyone who is online–especially children. 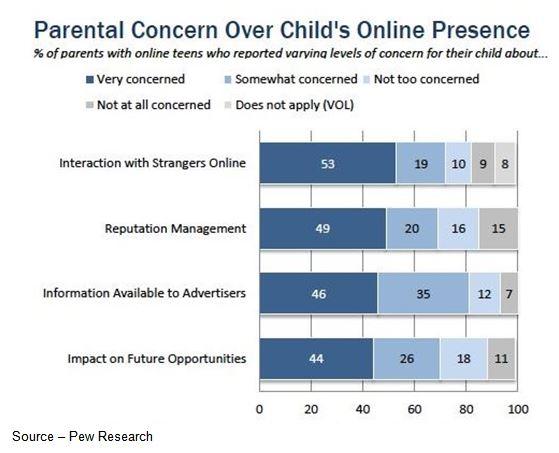 While teens are sharing more information about themselves on social media sites, they are undoubtedly more net savvy than their parents (having grown up connected).

They are also are more conscientious about managing the privacy of their information and less concerned about advertiser/marketing data gathering.

Teens continue to share more information about themselves on their social media profiles than they did when we last surveyed in 2008:

Sixty percent of youngsters on Facebook set their profiles to private (friends only), and most report they are confident in their ability to manage their settings.

Don’t Follow – While it has been recently reported that mobile service providers can install cookies and tracking information that can’t be removed, teens and preteens have long been the device user leaders in turning off their location-tracking capabilities.  They are also better at managing and culling their online persona.

Connected geners are very aware of their online reputations and not only ensure they aren’t tracked but also groom and cleanse the content and their social media presence.

While they aren’t overly concerned about third-party access to their data, a growing number delete/edit items they have posted earlier, deleted comments from others, removed their names from tagged photos and deleted or deactivated an entire profile.

While a recent Intel study found that the young generation is extremely tech-savvy, they are also concerned that technology makes people less human.

Eighty-eight percent say they have witnessed others being mean, cruel to individuals on social media sites and 15 percent have been the subjects of online bullying.

The younger generation is no different from most humans with most saying “others” seem to ignore the situation, while a small number say they see others defending someone and/or telling others to stop their cruel behavior.

Social media-using teens who have witnessed online cruelty say that people most often appear to ignore the situation; and a slightly smaller number of teens say they also see others defending someone and telling others to stop their cruel behavior.

David Zellaby emphasized, “You have to be taught to leave us alone.”

Unfortunately, 21 percent of those who have witnessed online bullying admitted that they have also joined in the harassment.

On the up side though, parents are still the top source for preteen/teen social media and mobile device users (86 percent).  Seventy percent have gotten advice from teachers, while 45 percent have received advice from peers.

Dr. Genevieve Bell, an anthropologist and research director at Intel Labs, said that her interpretation has been that technology has enriched their lives and their relationships but they would like it to do more for others and them. 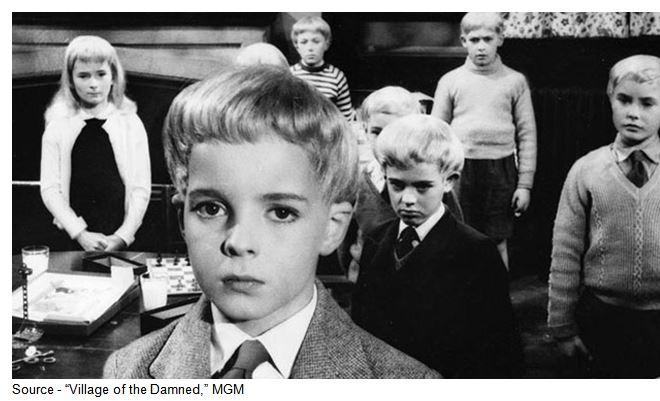