One of the reasons we don’t play videogames is that our attention tends to wander … look, there goes another flock of ducks!

Listening to Jen-Hsun Huang, the boss at Nvidia, give his impression of the changing world during the keynote at the company’s recent GPU – graphic processing unit – Technology Conference (GTC), we should have been focusing on how the breathtaking technology is making videogames and animation totally look and feel like real life.

We slipped right back to National Association of Broadcasters (NAB) memories because GPUs are only good if you have tons of data to process and do something with.

That made us think of the new movie/TV/content shift.

That’s probably why Red’s new 5K camera was such a hot attraction at NAB.

Red 5K – The new Red 5K camera created a lot of excitement at NAB, even though most of the movie work today is just slowly learning how to get the most from the company’s 4K camera. The creative power just keeps getting better as the industry finds new ways to produce, disseminate, monetize their content. Source – Red Digital Cinema

Sure, it’s going to replace the 4K that is gaining widespread usage for such films as the new “Hobbitt” movie. But replacing your own products is the way profitable folks stay one step ahead of the competition.

Still, the 4K is certainly no slouch.

The film crew is using the cameras to shoot raw content at 48 frames per second (fps), six days a week. That’s about 10TB of content…a day!

Big pixel piles are needed to make your entertainment.

You may not recall the stir when Waterworld was introduced back in 1995.

Every trade show booth, every big new TV set showed the movie so you could see the sharp definition and shadows of the water. 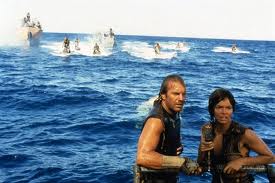 Wet Wonder – The ocean waves, ripples were almost hypnotic for those of us who focused on the production, post-production work Universal’s team delivered with the “Waterworld” DVD. Funny, 1995 doesn’t seem that long ago.

Moving water is a very difficult thing to encode properly and even tougher to decode.

Remember back when it was the content on a DVD and it was awe-inspiring!

But with 4K, we’re talking about an even bigger pile of pixels.

That’s why Hollywood, and any videographer who is concerned about quality, loves to hear just how far Huang and his crew can push the GPU and encoding technology.

Sure, there’s a lot more work and talent needed to deliver content; but we want to bore you with the inner workings of really good video production. Let’s just say it takes a lot of blood, sweat, time, talent and storage.

Even if the producer/ director uses old-fashioned 35mm film (lots still do), they convert it to digital because all of the creative work is done in digital.

Although movie and TV show credits may list Universal, Disney, Fox on the credits, but very little of the work is done in their house or on their equipment.

As Howard Payne pointed out, “Now this is about my money.”

The digital data is ingested and managed by the owners. They may pay the bills and take the profit, but the work is done by folks located around the globe.

Heck, they were working in the cloud before there was a cloud.

They shoot somewhere and the work is done by specialists.

Cloud Production – From the moment movies and TV Shows are shot the work enters the cloud, making it fast and easy for the industry to economically taking advantage of the very best production and post-production talents for specific segments of the project, regardless of where they are located. Source – Transformation

Whether it’s across town or on another continent, these independent talents edit, post produce, enhance, encode and transcode the video content jointly and independently–often in real-time.

There was a short period of time when they were moving the production process around the globe on physical disks but that was expensive and time-consuming.

The young executive commented on the routine, “The light's on but you never know, it really might be broken.”

We’re talking Petabytes of content; but they’ve gotten really good about moving huge packets around without losing a pixel.

Because time to market for a movie or show is so critical, post-production people rely on high- speed computers that often incorporate expensive, high-performance Nvidia boards.

And the systems/work require more than JBOD (just a bunch of drives), which was why folks like OWC (Other World Computing) received a lot of attention at NAB. 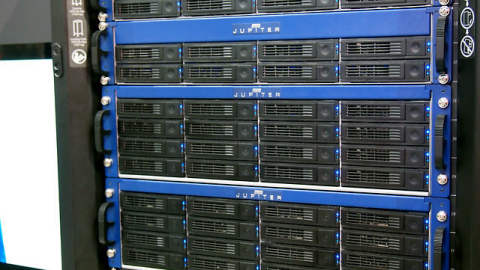 Fast Throughput – OWC’s new Jupiter mini-SAS storage solutions come in both tower and rack configurations that can be quickly and economically expanded to keep pace with the post-production’s teams’ requirements while handling all the video throughput with ease. Source – ArsTechnica

Depending on the storage budget and speed required, post-production people needs; the Jupiter systems can be populate with SAS or SATA (serial ATA) drives; and even SSDs (solid state drives).

The storage systems deliver the throughput performance (24-48Gbps) that people who are racing against the clock need to get their work done and delivered on time, on budget.

The new units excited Jack because he was heard to say, “Look, you've got to let me have one.”

To you, it may be just a two-hour movie or half-hour TV show (23 minutes after you take out all the ads) may be just a mental escape to you, but not to the producers, directors, investors.

All of that raw data, work in progress and the final film/show requires Petabytes of rich, expensive, valuable content. 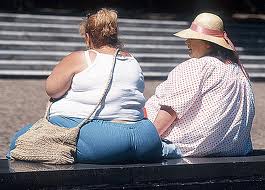 Terabytes to Petabytes – Video content keeps expanding and expanding as technology finds newer, better, faster ways to add more pixels to the images. Once the huge files are complete though content owners don’t want them just sitting around on a bench or in the cloud. Source – Healthlink

Petabytes of video that doesn’t just sit around.

Petabytes they’re not anxious to leave on someone’s cloud … somewhere.

That’s content that they can use, reuse, repurpose and resell again and again.

They care about preserving and accessing the material. And archivists can tell you of those who have lost key scenes or even entire segments, but they speak in whispered tones.

The challenge is, it’s difficult to store AV material in a way that is accessible, searchable and usable once (if) it’s found.

That’s why creators and AV archivists are so reluctant to let those Petabytes of creative work out of their sight, out of the house.

Howard Payne indicated he was equal to the job when he said, “You couldn't understand the kind of commitment that I have.”

While racks of tape are still widely used – and will continue to be used for years to come – the producers/archivists really want a solution they can store their content on, store it away for 20-50 years and know that when it’s wanted, the original content will be as fresh as the day it was stored.

In addition, they’d like not to have to pay ongoing storage fees in the form of continuing air conditioning and electricity bills.

Even though their offices are often in the basement or a cramped room in the back of the building, archivists like to know they’re doing their part–not in just preserving video content history, but also the environment.

That’s one of the reasons optical disc archiving just started to get some attention from the movie, TV and content production folks.

They’re realizing with the rising cost of content production and the long-term value and usability of the assets in future productions, preservation for future releases isn’t just nice, it’s a necessity.

The movie/TV/ content industry is cranking out more (and better) video assets than ever before.

They know keeping it around for a long, long time doesn’t just happen … even in the movies.

As Annie said, “You know, relationships that start under intense circumstances, they never last.”

Doesn’t bother Huang and the Nvidia team … they’re as intense as their content-creating customers.