Automating One Acre Under Glass

Introduction
In the field of home automation, there are few firms that can approach Leviton’s record as an industry leader and innovator. Since its founding in 1985, the New Orleans-based company has won more 100 awards for its products and high quality automation solutions.

Leviton’s extensive inventory of hardware and software tools has been used to solve the most complex challenges in the residential automation of lights, audio, heating, cooling, ventilation and security.

The ever-expanding line of Leviton’s products is not limited simply to home automation, however. The company has developed a powerful approach to automation that can also master the demanding requirements of just about any commercial installation. In addition to the high-level technical quality of Leviton products, they also enjoy another advantage: Installers can deploy Leviton systems quickly with virtually no callbacks.

The following case study of an Leviton installation in a large, multi-building plant nursery in Ontario is just one example of how Leviton is the right choice for large scale commercial automation.

The Challenge
The Richmond Nursery in Richmond, Ontario, is an eight-acre site that encompasses more than 15 gutter connected greenhouses. Altogether, the site has one full acre under glass. The nursery grows a wide variety of products, from mums and poinsettias to rabbit’s foot ferns and begonias. At any one time the facility will have more than 1,000,000 plants of up to 1,000 different types under cultivation. During the holiday season, the nursery can have 14,000 poinsettias growing in the greenhouses. All of those plants need regular watering, light and climate control. And given the wide variety of plants being grown at the facility, the nursery’s needs were complex – a simple, “one size fits all” care program would not work to reduce costs. For example, the nursery had previously used simple timers for controlling lighting. According to Peter Rofner, general manager of the Richmond Nursery, this solution needed constant adjustment as the hours of daylight changed during the year. If the timers were set early in the spring, the lengthening hours of daylight could lead to situations in which lights were still on even after sunrise. “We sometimes had situations where we were paying for two hours of lighting when it was unnecessary,” Rofner said. With such large-scale, complex operations, the nursery needed a way to better control its site and reduce substantial electricity and heating expenses. The Richmond Nursery was spending approximately $6,000 (Canadian) a month on electrical service and $4,000 (Can.) a month on natural gas heating. The plant nursery’s owners wanted a way to cut these costs and gain better control over the facility’s energy consumption. They also wished to improve control over lighting and increase security. And they wanted to do this with an integrated automation system. 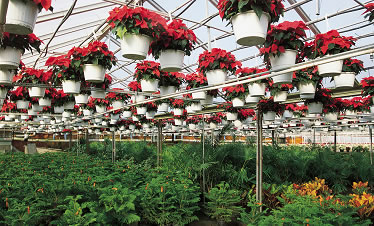 Unlike controlling the zones in, for example, a warehouse, system installer Levetsovitis of Natural Automation faced the challenge of controlling the environments for some 1,000,000 living plants. He had to ensure that heating, ventilation, lighting and water usage were correct for many different types of plants. “Specific species of plants get specific amounts of water,” Levetsovitis said. “We went into great detail there.”

Another tricky aspect of the installation was adjusting the watering rate based on the relationship between outside and inside temperature. “When it’s 70° to 80° F outside, it’s 110° F in the greenhouses,” Levetsovitis said. “At that inside temperature, it takes so many more gallons to properly water the plants. For example, at 110° we might need 60 gallons per minute.” And these parameters change with the seasons and the plant species. When it’s cold outside at Christmas time, the nursery raises poinsettias. In the warmth of late spring, a major product is tomato plants. Similar to the watering requirements, ventilation rates and lighting amounts also required fine tuning to season and plant species.

Another interesting wrinkle for Levetsovitis was the need to integrate devices known as CO2 burners. Plant life takes in carbon dioxide and throws off oxygen. The more carbon dioxide in the air, the faster plants will grow and the sooner they can be sold. So the Richmond Nursery uses natural gas fired CO2 burners to increase the level of carbon dioxide in the greenhouse air. The nursery’s four Priva burners provide the greenhouses with more than CO2, they also produce heat and water vapor, two other necessary components for plant growth. “They look like jet engines,” Levetsovitis said. “They are monitored with thermostats and CO2 detectors. We integrated these units into the Leviton system.” One aspect of these CO2 burners that was important to get right was the legal requirements to keep CO2 levels below certain thresholds, for example, below 4,000 parts per million to protect workers at the nursery. “The sensors were important for the system to precisely monitor the CO2 level,” Levetsovitis said. “If the system detects that the level has exceeded the threshold, then the Leviton system shuts down the CO2 units.”

Peter Rofner had previously developed a Linux-based software application for his own use that displays in a graphic format the temperature inside and outside the greenhouses and the resulting growth rate of the plants at the nursery. This graphical representation of the data is a useful tool to assist Rofner in managing the nursery’s expenses. Rofner wished to continue to use the data from this application, but also wanted to port the data over to the new Leviton system. Given the open architecture of HAI systems, Levetsovitis was able to integrate Rofner’s graphical growth tool so that the growth data could be used in controlling the nursery’s systems. “We took data from that graphical software,” Levetsovitis said, “and integrated it into the flow of data in the system. It automatically gets plugged into the larger picture.”

Rofner was pleased with the capability of the Leviton system to integrate the data from his Linux temperature/growth analysis tool. If the nursery had used some other automation system, Rofner would have had to buy a canned piece of software that, in addition to the extra expense, likely wouldn’t have done the job as effectively as the software he had already developed. “With other systems,” Rofner said, “you would have to buy an expensive module to do that.”

The Results
The Leviton system has drastically reduced the electrical and natural gas expenses for the business. The Richmond Nursery’s electrical expense was halved from $6,000 Canadian per month to $3,000, and gas expense was reduced from $4,000 to $2,500. These monthly energy savings equate to yearly savings of $36,000 for electricity and $18,000 for natural gas.

In addition to these savings, managing director Rofner also has a complete, integrated system that provides him with detailed data on the operation of his business. And he knows that, with the Leviton automation system now in place, as conditions, seasons, and plant species change, the system will automatically adjust and optimize the nursery’s systems for water, ventilation, heat and CO2.

Louis Levetsovitis was able to accomplish the installation easily and quickly because – unlike other systems that claim full automation but are really only for controlling audio and video in the home – Leviton is a capable commercial grade product. “Leviton is a true automation system,” said Levetsovitis. “Others claim to be commercially capable, but they are essentially AV systems.”

Rofner is pleased with the new Leviton system. “We’ve made huge strides over what we used to have,” Rofner said. “It’s easier for us to program supplemental lighting, giving us control we didn’t have before.” Rofner, who has a system in his home, was familiar with the capabilities of Leviton automation. His home system provided him with ready examples of how Leviton systems can be integrated with a variety of third party gear. He knew that an Leviton system would give him excellent control over his business and would be open to integration with other systems. “That’s why I chose Leviton,” Rofner said. “Other systems are proprietary and closed. Leviton fit the bill so I could have enough control and so I could do what I want to do.”

The Leviton Advantage
The Leviton advantage can be summed up in two words: power and flexibility. Leviton has long supported a variety of open protocols for system integration. According to Greg Rhoades, Leviton director of marketing, this capability allows Leviton systems to be the central processing unit of the system and work with outside gear. “One of our strong points is to be the brain to tie together third party products,” Rhoades said.

Conclusion
Leviton, the longtime leader in home automation, has systems and equipment that can handle much more than just residential systems. As shown by the installation at the Richmond Nursery above, Leviton automation has all the capabilities to handle challenging and complex commercial installations. Leviton products give dealers and installers great flexibility to speedily create effective and reliable systems for their customers.

Leviton allows dealers to write interfaces that control everything from lighting modules to incorporating iPads. Installers can add simple tweaks to systems or they can build something new and client specific. “We allow dealers to make interfaces that will work with just about anything,” Rhoades said.

Leviton allows dealers and installers to “push the envelope,” to uncover solutions that even the company hadn’t yet recognized. “We’ve had cases where installers brought things to our attention that we didn’t even think were possible.” Rhoades said. “They can have a bigger stake in the system using our products.”

While many competing systems require dealers to use only proprietary software and equipment, Leviton’s goal is to integrate with a variety of available equipment. “Many systems want you to use all their gear,” Rhoades said. “But we do our best to integrate all types of gear.”

Leviton is not just a home automation company, but can handle complex commercial installations like the Richmond Nursery.

Installers know Leviton products will work out of the box and that reliability will greatly reduce callbacks.