Are You Driving a Car or a Computer?

I grew up during the muscle car age. It was a time when you drove the car, maneuvering the gear shift through its paces, squealing rubber in first gear, and the wind whipping your girlfriend’s hair.

Today, the car drives you. It tells you when to make a turn, keeps the vehicle’s interior at a constant temperature and responds to voice commands. We have smart cars that learn our driving habits and correct us when we make mistakes. Our vehicles are now smarter than a fifth grader.

The new automotive technology is artificial intelligence, which recognizes road patterns and solves problems as the vehicle drives itself. I am not sure that I want to just sit back and let the car interact with other traffic. Engineers are designing cars that are completely autonomous and can be driven without a human driver. Using a pair of TV cameras, a processing computer identifies obstacles in relation to your vehicle, while a problem solving computer controls the vehicle and determines the best path around the obstacles.

I’m getting ahead of myself as the engineers are not quite at the point of total vehicle control, which by the way, the engineers claim will be safer than human controlled vehicles. 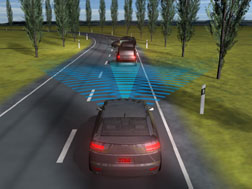 One of the latest advances in vehicle safety is the Automatic Emergency Braking system, which could avoid an accident or mitigate the collision damage when an impact is unavoidable. AEB takes data from forward looking radar and video cameras to provide a real-time image of the road ahead. When the driver applies the brakes, maximum brake pressure is applied automatically. If the computer determines that the driver’s reaction is not sufficient to avoid a collision, AEB will apply maximum brake pressure to reduce the impact, while an electronic stability control system will keep the vehicle from going out of control. 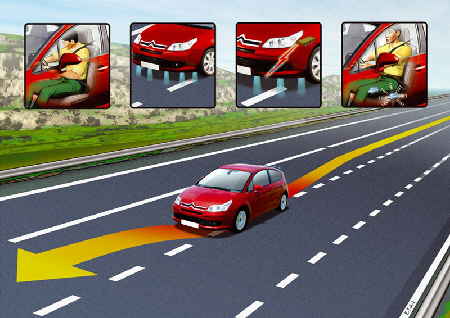 The Lane Departure Warning System offered by Citroen and other manufacturers is a major step forward in driving safety. This innovative system warns the driver if the car crosses the lane markings. A vibrating mechanism mounted in the car seat is triggered on the side corresponding to the direction of vehicle drift to alert the driver who may, for example, be feeling drowsy. 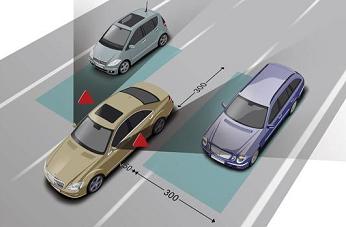 Side collision warning systems can provide an added measure of safety for turning, merging and lane changing maneuvers when a driver cannot see objects in the blind spots along the sides of his vehicle. If a vehicle is in the adjacent lane when a driver has begun a lane change or merge, the driver may not be aware of the potential hazard. Blind side collision warning systems provide advanced warning to allow additional time for a driver to react and avoid a collision. Side collision warning systems provide visual and/or audible alerts to warn drivers when objects are detected. Some systems indicate the distance from a detected object on a digital display installed in the dashboard. Visual alerts can be used with audible alerts that vary in tone and frequency as the vehicle moves closer to an object.

OnStar is a great safety feature offered by General Motors. VehSmart has developed a competitive product and added features, making it a strong competitor to OnStar. VehSmart is the provider of in-vehicle safety, security and communication services, available on all vehicles manufactured after 1997. The product is part of a developing industry, called Telematics, a rapidly growing market that combines GPS systems and communication capabilities to develop hybrid automotive navigation and communication systems. Benefits include impact notification, emergency services, roadside assistance, and concierge services. Features include speed notifications, panic stop alerts, low battery alerts, and time schedules. Virtual boundary settings set a safety zone or virtual boundary around a selected location. When the vehicle enters or leaves an active safety zone, alerts will be sent via email and/or text message. This is a great way to monitor young drivers.

­Many­ car thieves aren't after your entire car; they're after individual pieces of it. These car strippers can do a lot of their work without ever opening a door or window. And a thief armed with a tow truck can just lift your car and drag the entire thing away. Today, we have a variety of theft alarms that detect such activity. A tilt alarm will sense when your car is other than level, such as when it is attached to a tow truck. You can purchase an alarm system that plays a recorded message if someone gets too close to the vehicle, which alerts an intruder that you have an advanced alarm system, possibly preventing a thief from proceeding.

There are not many self-parking cars on the road today, but I believe this is a feature that all cars should have. Because of mall shopping, we have become used to just pulling into a parking space between two lines, which is not much of a challenge, but when faced with parallel parking on the street, many of us panic. Self-parking cars currently on the market are not completely autonomous, but they do make parallel parking much easier. The driver still regulates the speed of the vehicle by pressing and releasing the brake pedal. Once the process begins, the on-board computer system takes over the steering wheel. Self-parking systems have sensors distributed around the front and rear bumpers of the car, which act as both transmitters and receivers. The car detects the other parked cars, the size of the parking space and the distance to the curb, then steers it into the space.

In the near future, most cars will be connected to the Internet, allowing your car to take advantage of voice-recognition software to use specially designed applications that allow drivers and passengers to listen to Internet music via Pandora and keep in touch with social networks like Twitter while on the road. If kids want to watch videos streamed from the Internet in the back seat or a passenger wants to search for the best lunch nearby, the Internet connection makes it possible. Using the same dashboard-mounted screen employed by the navigation and stereo system, the display can project two separate images in states where it is allowed with one to the driver and a different one to the passenger. 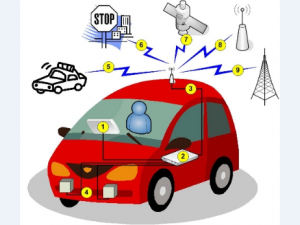 An Internet- connected car can communicate with other vehicles and the surrounding infrastructure as an active safety measure. The car will sense that the light ahead is red and that the car is going too fast to stop, the AEB will stop you from crashing into an intersection.

Contactless payment is becoming a reality with your smart phone, but in the future your car might have the same capability, such as paying tolls or parking. The best part of a connected car is that all your other mobile devices can get updated on the fly, and so will your car. The weather, the stock market, traffic conditions will all be updated on a continuous basis.

Voice control is now starting to become the primary interface in the car because it allows you to keep your hands on the wheel, your eyes on the road and focus on driving. Ford’s recognition software can recognize over 10,000 words. Voice control will be important in the safety of driving cars with sophisticated technology dashboards. 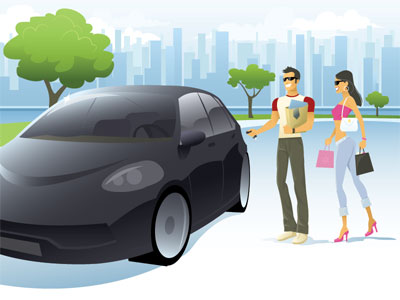 There will be smart phone apps that will control your car. As you walk towards the car, your phone will adjust the temperature, turn on Pandora and unlock the door as you step closer. What more can you ask for?

All though some of this technology has been around for some time, it is limited to certain brands and models. As the cost of this technology comes down, we will see these features not just in the luxury cars, but in every vehicle